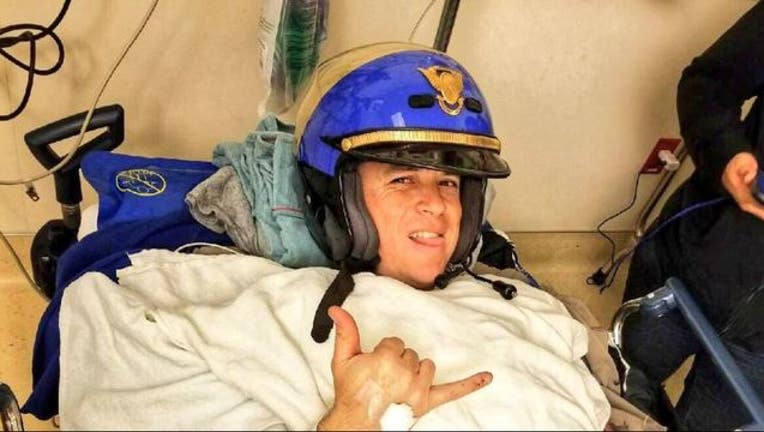 CONTRA COSTA COUNTY, Calif. (KTVU) - The CHP officer who was hit and injured by a drunk driver in Concord is on the mend.

The California Highway Patrol arrested 52-year-old Tammy Peggy Louise Walker of Pittsburg on two felony counts of driving while under the influence after officers say she slammed her Chevrolet Trailblazer into an officer's motorcycle, sending him to the hospital with crushed legs.

Walker was treated and released at the scene and booked into the Martinez Detention Facility on two counts of felony DUI, assault on a peace officer and driving on a suspended license for a prior DUI conviction, which caused great bodily injury to another person.

She declined a KTVU request for an interview on Tuesday.

She is accused of driving her truck into the back of Officer Martin Lendway's parked motorcycle Monday about 6:15 p.m. He had parked on the side of eastbound Highway 4 just east of Port Chicago Highway in Concord while he was helping out drivers in a two-vehicle collision. He had parked behind the cars and had his rear emergency lights on to warn traffic, the CHP said.

Walker slammed into Lendway's motorcycle, the CHP said, "catapulting it forward" onto the officer and a Ford F-150, which had been part of the earlier collision. The Ford "partially landed" on the officer, causing major injuries. He is scheduled to have surgery on Tuesday afternoon.

While this was happening, the CHP said, two other cars tried to swerve the accident, and in all, six vehicles were involved.

The CHP thanked the unnamed citizens who stopped at the scene to help the officer.

Four years ago, Lendway unveiled the Kenyon Memorial Interchange highway sign on Interstate 680 and Highway 24 after his colleague and friend, Kenyon Youngstrom was killed in Alamo during a traffic stop. Youngstrom had stopped to remove a dead deer from the highway when an armed man, who had also been pulled over at the same time for having an obscured license plate, shot him with a semi-automatic handgun in September 2012.

And less than a month ago, CHP Officer Andrew Camilleri was killed on Christmas Eve on Interstate Highway 880 in Hayward. He was patrolling the freeways with his partner conducting DUI stops when driver Mohammed Abraar Ali of Hayward rear-ended the patrol car at speeds of 100 mph, prosecutors said. Ali is expected to be charged with murder and DUI on Tuesday.