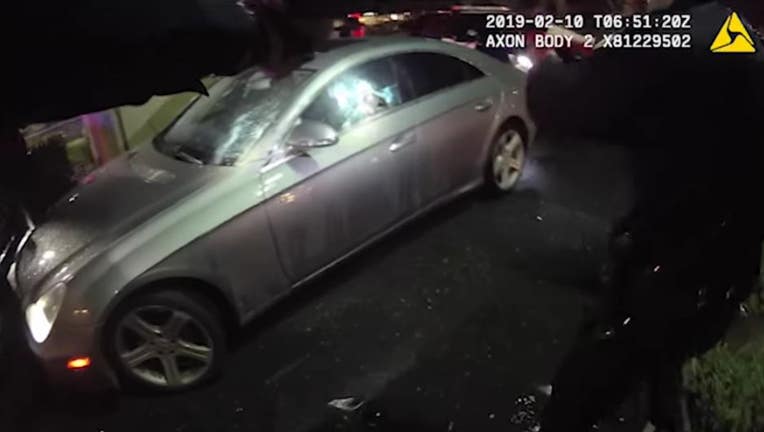 It also came to light, through internal police documents, that Vallejo Police Chief Shawny Williams sought the termination of one of the six officers involved in McCoy's shooting.

On March 27, 2020, more than a year after the incident, Williams issued Officer Ryan McMahon a notice of intent to discipline and to terminate him. The notice details safety violations against Officer McMahon for not observing safety standards, unsafe handling of weapons or firearms while on or off duty, and for incompetence.

Essentially the violation did not involve unreasonable force, but was because McMahon shot just before another officer stepped into the line of fire, didn't communicate his intentions, and that he endangered fellow officers.

It is not clear if McMahon is still on the force. With confidentiality surrounding police disciplinary issues, no one seems to be talking. Records indicate he had previously been placed on paid administrative leave and was cleared of criminal liability by Solano County District Attorney in another deadly high-profile shooting in the 2018 killing of Ronnell Foster.

In the additional video that was released, police are shown responding to a welfare check of an unresponsive person at a Taco Bell parking lot.

An officer with his weapon drawn on McCoy, who is asleep in a car, commands another officer to "call it out," that there is a gun in McCoy’s lap. “I’m going to bust that fucking window,” the officer says adding, “I’m going to pull him out and snatch his ass.”

The officer describes McCoy’s weapon: “The magazine’s out. So if he shoots he’s only got one shot.”

However, police say the gun was in fact loaded and that the magazine extended past the grip.

The responding officers can be seen strategizing and come up with a plan to open the driver’s side door, which appears to be unlocked. One officer is about to open the door and says he’s going to grab McCoy's gun and suggests another officer cover him in case McCoy grabs his weapon. They also notice that the car is in drive.

McCoy can be seen coming to on the video and scratches his shoulder with his right hand. Police on the video say he's not fully awake at this point.

When McCoy eventually bends forward, police give verbal commands for him to show his hands. In their presentation, police play this portion in slow motion without sound. Later, at regular speed, you can hear their commands as they open fire when they say McCoy reached for a gun on his lap.

A barrage of 55 shots by six officers rings out, some pierce through the driver’s side window. After the gunfire police say McCoy is still moving and warn each other to be careful.

Last week Solano County D.A. Krishna Abrams, who recused herself from the case, announced former San Bernardino District Attorney Michael Ramos would be a special prosecutor in McCoy's case. The California attorney general had already declined to review the case.

KTVU legal analyst Michael Cardoza said Ramos' background is concerning and that he may be biased and partial to law enforcement.