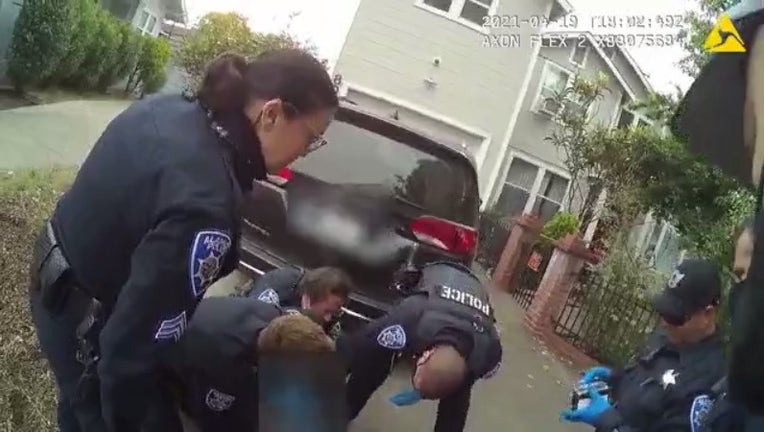 Alameda police officers arrive after Mario Gonzalez suffers medical distress after police kneel on his back to restrain him. April 19, 2021

ALAMEDA, Calif. - Civil rights attorneys have filed a claim against the city of Alameda saying that Mario Gonzalez died in custody because he was restrained by police officers, the second type of "restraint death" in three years.

Filed by attorney Julia Sherwin on behalf of the Gonzalez family, the claim states that although the 26-year-old out-of-work cook, "appeared to be confused and possibly intoxicated," he was not a threat to himself or anyone else. And, the claim continues, police had no reason to detain him without reasonable suspicion or other legal cause, and he was not engaged in any crime.

The Alameda officers put "significant weight on his back, shoulders, neck and legs for over five minutes," the claim says, adding that Gonzalez "struggled to breathe" before he died on April 19, despite threatening or actively resisting officers.

The claim says Gonzalez died from the "use of excessive force, improper restraint, mechanical asphyxia, and positional, restraint and compression asphyxia."

Two neighbors had called the police non-emergency line to report that he seemed intoxicated near their homes on Oak Street and that he had possibly stolen some alcohol.

SEE ALSO: Who was Mario Gonzalez? Man who died in police custody had lost job during pandemic

Body camera footage shows officers pinning Gonzalez on the ground for about five minutes until he could no longer breathe.

A legal claim is a mandatory precursor to a lawsuit.

"There are three investigations taking place regarding the death of Mario Gonzalez, two by outside agencies (the district attorney and the sheriff) and one independent investigation initiated by the city," Alameda spokeswoman Sarah Henry said in an email.  "To protect the integrity of these active investigations and consistent with our general policy of not commenting on pending litigations/claims, we do not have any additional details to share at this time."

This isn't the first case of what might be determined as restraint asphyxia in Alameda.

In December 2018, Iraq War veteran Shelby Gattenby died after Alameda police officers pinned him prone on the ground with weight on him, in addition to Tasing him multiple times.

In that case, one of the officers even instructed another officer to use his body weight to hold Gattenby down.

"After Gattenby's death, the Alameda Police Department should have overhauled its policies and training to bring them in line with the Constitution, and to prohibit prone, weighted restraint," Sherwin wrote. "If they had done that, Mario would still be alive."

Sherwin is an expert in the subject of restraint or positional asphyxia.

She served as a pro bono consultant on that topic for the prosecutors in the Minneapolis trial of former Derek Chauvin, who was found guilty of murdering George Floyd last summer.

Gonzalez died on the day that the jury was deliberating that case.