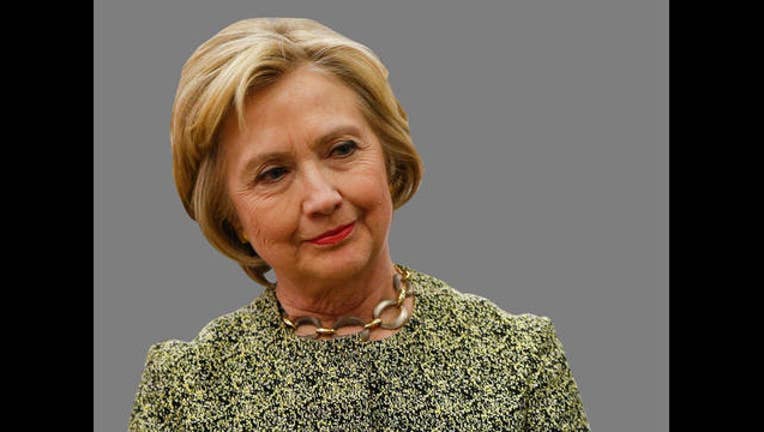 PHILADELPHIA (AP) — Armed with a blistering tabloid cover, Hillary Clinton is pitting Bernie Sanders against the parents of children murdered in Sandy Hook, part of an effort to punch her way into the critical New York primary.

The inflammatory rhetoric underscores the importance of the April 19 New York contest to her campaign and the mounting frustration of Clinton and her husband, former President Bill Clinton, with the lingering primary battle.

That irritation spilled out into the public arena Wednesday, when Clinton released a flurry of attacks on Sanders, questioning his truthfulness, preparedness for the presidency and loyalty to Democratic party principles.

Sanders responded at a rally in Philadelphia. "She has been saying lately that she thinks that I am quote unquote not qualified to be president," he said. "I don't believe that she is qualified if she is, through her super PAC, taking tens of millions of dollars in special-interest funds." He also said Clinton is not qualified because of her vote on the war in Iraq and her support for trade agreements that he says are harmful to American workers.

Clinton spokesman Brian Fallon responded quickly, writing on Twitter: "Hillary Clinton did not say Bernie Sanders was 'not qualified.' But he has now — absurdly — said it about her. This is a new low."

During an appearance on MSNBC Wednesday morning, Clinton pointed to a New York Daily News cover criticizing Sanders for saying he did not think victims of a gun crime should be able to sue the manufacturer. His comments came when the newspaper's editorial board asked him about a wrongful death lawsuit against a rifle maker over the 2012 massacre at Sandy Hook Elementary School in Newtown, Connecticut.

"That he would place gun manufacturers' rights and immunity from liability against the parents of the children killed at Sandy Hook is just unimaginable to me," said Clinton, who has long sought to highlight the candidates' differences on guns.

Clinton's campaign — which seized on a number of statements in the interview — organized a phone call for reporters with elected officials and gun control advocates, including Jillian Soto, whose sister was a teacher killed at Sandy Hook, called Sanders' comments "offensive."

"He doesn't know the pain my family has been going through since December 14, 2012," she said.

Sanders responded Wednesday by criticizing Clinton's 2002 Senate vote in favor of the Iraq war. "Maybe Secretary Clinton might want to apologize to the families who lost their loved ones in Iraq," he told CBS News.

Clinton also jumped on the limited details Sanders offered in the editorial board meeting about how he would break up the country's big financial institutions, saying he "hadn't done his homework." And in a separate interview with Politico published Wednesday, Clinton said she tries to explain things in a more "open and truthful way than my opponent."

Later, at a Philadelphia job training center, Clinton said people should know what she would do if she's elected president, "not just lots of arm-waving and hot rhetoric."

Despite a sizable delegate lead, the stakes are high for Clinton in New York, the state she represented for eight years in the Senate. A loss there would be a major political blow that would highlight her weaknesses within her own party, particularly with younger voters who have powered Sanders' primary bid and will be a crucial part of any Democratic candidate's general election campaign.

Clinton aides say there's little they can do to directly push Sanders out of the race. They fear any such effort could compromise her ability to win over the support she'll need in the general election.

Instead, her campaign is escalating its attacks in hopes of a decisive win in New York and assembling an "all but insurmountable" delegate lead by the end of the month.

Sanders notched his sixth win out of seven primaries in Wisconsin on Tuesday night, a streak his campaign is casting as a sign of fresh momentum. If Sanders can win a big share of delegates in New York and the five northeastern contests that follow, his aides believe they can make even larger gains in May and June contests in Oregon and California.

"She's getting a little nervous," Sanders told supporters at a rally in Wyoming on Tuesday night. "I believe we have an excellent chance to win New York."

Sanders must win 68 percent of the remaining delegates and uncommitted superdelegates if he hopes to clinch the Democratic nomination. That would require blowout victories by Sanders in upcoming states big and small.

But members of Sanders' team says they see an upside to Clinton's tougher tone: When Clinton attacks Sanders, they say, it pulls down her favorability ratings and makes it harder for her to argue to voters that she's honest and trustworthy.

"We've held rallies now in every part of the state where tens of thousands have come out with 24- or 48-hour notice," said Bill Lipton, New York state director of the liberal Working Families Party, which is backing Sanders. "There's been incredible energy."