GEYSERVILLE, Calif. - A beloved mail carrier in Geyserville is learning how a community can serve as a much needed reason for hope during a time of loss.

She's known to many in her community as "Geyserville's favorite mail carrier." Last month, Bernadette Laos and her husband Justo lost their home in the Kincade Fire.

On Oct. 24, during evacuations from the fire, KTVU interviewed Bernadette Laos. Emotional and overwhelmed, she said, "I don't have nothing. Not one thing in my house, and I wanted to go back in and get my jewelry box because it's my dad's wedding ring and they wouldn't let me go back in and they told me the house is gone."

Since that day, there has been an outpouring of support for Laos. It's coming in the form of handwritten letters from some of her youngest customers, donations of everyday items, and funds being raised to help her and her husband try and replace some of what the fire destroyed. In some cases, it's a simple hug and an acknowledgment that the Laoses are not going through this difficult time alone.

For the longtime mail carrier, the neighbors she serves are not just customers. Over the years, they've become family.

"There is not a person on her route that she does not know by name," said Tina Jackson, who has launched a GoFundMe campaign to help Laoses in the aftermath of their loss.

The community has stepped up in their efforts to help the couple, but it has not been one sided.

Jackson said even after fire took the Laos's home, the mail carrier didn't hesitate for a moment to find a way to assist others.

"The day after the fire, she was out helping the community delivering food with El Coqui Puerto Rican Cuisine to first responders and evacuation centers," recounted Jackson.

And it didn't take long for the devoted mail carrier to return to her route, a route that now serves as a glaring reminder of how her family is not alone in their loss.

"It’s not just her home," Jackson said, "It’s so many people she has grown to know and care about that she drives by every day as she does her job to see the rubble and ash that is left."

When the Laoses were finally allowed to return to their property, with the help of friends and neighbors, they searched and searched for the ring that once belonged to Bernadette Laos's father.

That ring was never recovered. But amid the the disappointment and in the rubble, and alongside those who wanted to help, they managed to find something else of great value.

"We spent a day sifting through the ashes with her and her husband Justo and were excited to find his wedding ring," Jackson said, sharing with KTVU a photo of that moment he put the ring back on his finger. 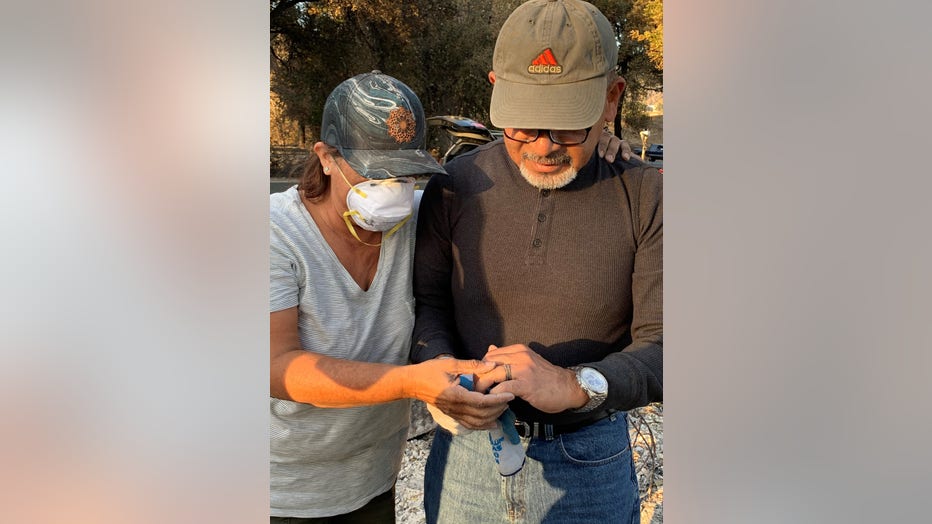 Bernadette and Justo Laos after they recover his wedding in the rubble of their burned down home.

As the long road to recovery gets under way for the Laoses and others who lost much in the fire, the mail carrier's route is dotted with constant reminders of how much she is valued in the communty she serves.

"Now she stops for a teary eyed hug of support accompanied by offers to help," Jackson said. "Little kids are leaving hand drawn notes to support and another little boy named Junior bought her a new blanket with his own savings." 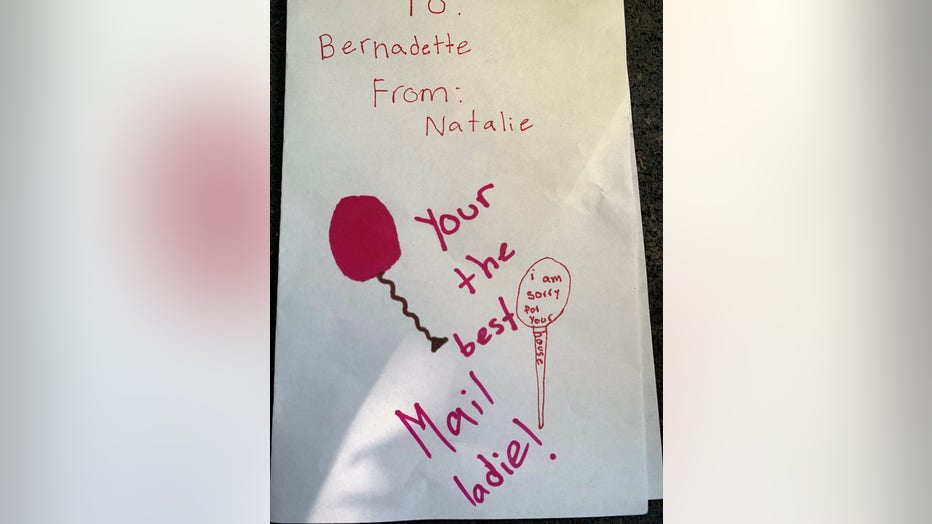 A letter from a child to Bernadette Laos (Tina Jackson)

When the reality of all that she's lost hits her, those demonstrations of support help carry her.

"Every day I see her come to a realization of another little thing that is gone forever," Jackson said, but despite that, she added, "she feels like she has an 'Army of people' behind her."