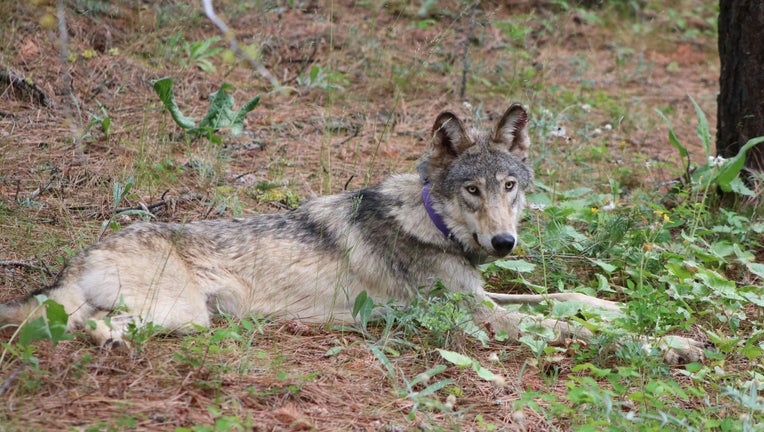 A young gray wolf known as OR-93 tracked farther south in California than any previous wolf equipped with a GPS collar, state fish and wildlife said on March 22, 2021. The wolf's whereabouts were unknown, with his last collar transmission on April 5, (Austin Smith Jr., Confederated Tribes of Warm Springs/California Department of Fish and Wildlife )

There is growing concern over the fate of a rare gray wolf that made a remarkable journey from Oregon and across at least 16 California counties, to travel farther south than any other GPS collared wolf in the Golden State in more than a century.

The wolf's last known location was in Central California.

The male yearling wolf, known as OR-93, was born in Oregon and was fitted with a GPS collar in June 2020. He left his pack and crossed the Oregon-California border at Modoc County on Feb. 4, 2021.

Over the next few weeks, he passed through Alpine, Lassen, Plumas, Sierra, Nevada, Placer, El Dorado, Amador, and Calaveras counties, according to the California Department of Fish and Wildlife (CDFW).

The agency said that on Feb. 25, OR-93 entered Mono County east of Yosemite National Park, becoming the first gray wolf to be spotted near the park in more than a century. He was tracked in western Tuolumne County a few weeks later, and then by late March, the young wolf was located farther south in Fresno County. From there, he crossed Highway 99 and Interstate 5 and then made his way to San Benito County, according to CDFW officials.

"His status is unknown," the fish and wildlife officials said on the CDFW Gray Wolf web page, adding, "Through April 5, OR-93 had traveled at least 935 air miles in California, a minimum average of 16 air miles per day."

The wolf was originally part of Oregon's White River pack, located southeast of Mt. Hood. He was fitted with a tracking collar by the U.S. Fish and Wildlife Service and Confederated Tribes of Warm Springs, according to CDFW officials.

"Like many young wolves, he subsequently left his pack in search of a new territory and/or a mate," the department said in a press release back in March.

He was the 16th gray wolf that was documented to have dispersed into California, with most of them coming from Oregon, according to wildlife officials.

Gray wolves were eradicated in California early in the last century due to their perceived threat to livestock. It wasn’t until 2011, they were confirmed to have returned to the state when a wolf from Oregon crossed into California.

Wildlife officials identified starvation, disease, and human-related events like illegal hunting and collisions with vehicles among the leading causes of death for gray wolves.

Gray wolves are an endangered species under California law, and state animal officials warned residents that it’s illegal to harass, harm, pursue or capture them.

"CDFW is working to monitor and conserve California’s small wolf population and is collaborating with livestock producers and diverse stakeholders to minimize wolf-livestock conflicts," the department said.

The agency called on the public to report potential wolf sightings in California, saying they’re a valuable monitoring tool.

Wolf sightings can be reported to CDFW here.