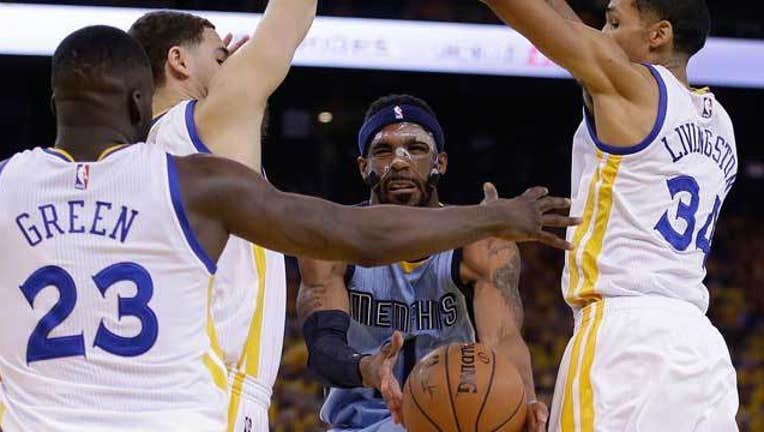 "My eyesight was pretty good. I didn't have too many times where I felt like my vision was impaired by looking too fast or the mask getting in the way," Conley said. "It does get hot. I had to open it up a few times and let the sweat come down and let the steam out a little bit."

Wearing the clear mask to protect his swollen face and red left eye, Conley stole the spotlight from newly minted MVP Stephen Curry. He made his first four shots to get the Grizzlies going, and Memphis did the rest on defense.

Zach Randolph had 20 points and seven rebounds, and Marc Gasol and Courtney Lee scored 15 points each to help the Grizzlies end Golden State's 21-game home-winning streak. The Warriors dropped to 42-3 this season at rowdy Oracle Arena, losing for the first time at home in more than three months.

Game 3 is Saturday in Memphis.

Memphis rallied behind its banged-up floor leader, scoring the final nine points of the first half to take a 50-39 lead. It was only the second time this season the Warriors were held under 40 points in the first half.

When the Warriors started to rally in the fourth quarter, Conley came through again. He made a 3-pointer to give the Grizzlies a 90-80 lead with 2:11 left, silencing the sea of golden yellow shirts for good.

Conley's gritty performance seemed to lift the Grizzlies throughout the game.

During one timeout, the TNT broadcast caught teammate Tony Allen calling Conley "One-Eyed Charlie," a refrain he repeated after the game. Allen and others praised Conley's contributions and also had some fun with their teammate's healing face.

"He said he got great looks out of one eye, so I'm very happy for him," Gasol quipped.

Conley, who had three assists in 27 minutes, cramped up and went to the bench briefly in the final minutes.

By that point, his job was done.

Curry collected 19 points, six assists and five rebounds but had little help from backcourt teammate Klay Thompson, who was smothered by Allen's aggressive play. The Warriors had 20 turnovers and shot just 41.9 percent, including 23.1 percent from 3-point range. The Grizzlies had 13 steals.

"I thought we lost our poise tonight. We were in such a rush," Warriors coach Steve Kerr said.

Golden State had not lost at home since a 113-111 overtime defeat to Chicago on Jan. 27. The only other home loss came to San Antonio on Nov. 11.

The Warriors had won their first five games in these playoffs, including a sweep of New Orleans in the opening round, and were riding the good vibes of Curry's crown.

Curry received the MVP trophy from NBA Commissioner Adam Silver during an on-court ceremony just before tipoff, and fans serenaded Curry with chants of "M-V-P!"

Curry said it was "weird" having the ceremony so close to game time, but he doesn't think it was the reason the Warriors lost. Instead, he chalked that up to the team's 6-for-26 shooting on 3s.

"We're not going to overreact to one bad shooting night," Curry said.

Conley started after missing the last three games recovering from surgery to repair broken bones in his face. He had been concerned about his mask fogging up, but he looked comfortable and in control.

Conley avoided serious contact until the second quarter, when Draymond Green hit him in the face trying to grab the ball as the point guard lay on the court signaling for a timeout. Conley winced in pain before getting up, and some Grizzlies shouted at Green as the teams headed to their benches.

Officials reviewed the play and ruled there was no excessive contact. Conley couldn't tell if Green's swipe was overly aggressive, and Green denied any wrongdoing.

Of course, any contact near Conley worried Joerger. He said Conly is playing through tremendous pain — even if he won't admit it.

"A little tired, I'm not going to lie," Conley said. "The cramping at the end of the game is just a fact I haven't played. I didn't drink a lot of water. Other than that, I felt good."

Grizzlies: Memphis had lost three straight to the Warriors since winning the first matchup this season. ... The Grizzlies went 1-1 against the Warriors in Memphis.

Warriors: Golden State had been 44-0 when holding opponents to fewer than 100 points. ... The Warriors' lowest-scoring first half this season was 38 points in a loss at San Antonio on April 5, and their season low in points came in a 100-86 loss at the Los Angeles Clippers on Dec. 25.

Allen highlighted Memphis' dominating defensive effort. He frustrated Thompson and forced him into quick and contested shots. The All-Star guard scored 13 points on just 6-of-15 shooting, including 1 for 6 from beyond the arc.