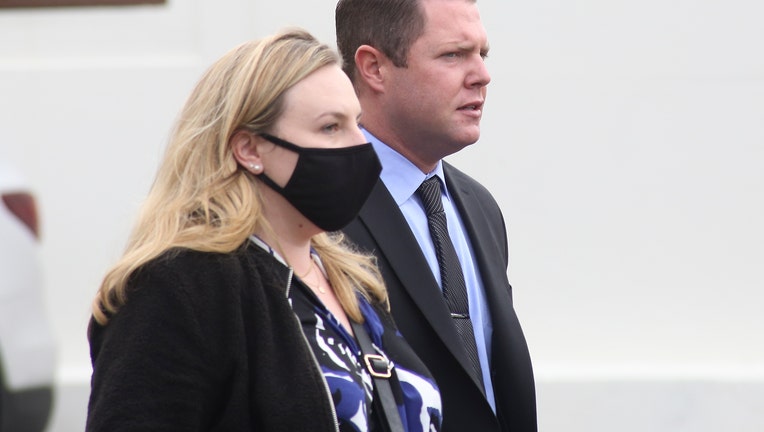 Danville police Deputy, Andrew Hall, walks out of the A. F. Bray Courthouse in Martinez, Calif., with an unnamed woman, on Oct. 21, 2021, during lunch break. Hall, accused of manslaughter, shot Arboleda nine times during a police chase in Danville on

Judge Terri Mockler gave the jury its final instructions before recessing court until Monday. Thursday's session painted two very different versions of what happened nearly three years ago, after Laudemer led police on a slow speed pursuit through Danville that began over a "suspicious person" report and ended with Hall shooting the 33-year-old as he tried to drive away between police vehicles.

Danville contracts with the Contra Costa County Sheriff's Department for police services. Hall faces charges of voluntary manslaughter and assault with a firearm, both felonies.

Much of the debate between sides Thursday was over what Hall knew when he entered the situation, with Arboleda stopped with two police units behind him at the corner of Front Street and Diablo Road.

Other points of contention were over whether Hall followed sheriff's department procedures and his own training. As he began his closing statement, Hall's attorney Harry Stern said the jury heard no evidence Hall violated his training, earning an objection from prosecutor Chris Walpole and a rebuke from Mockler, who told the jury to disregard Stern's statement. She also cleared the courtroom for 15 minutes to confer with both sides.

When Stern continued, he said much of the prosecution's arguments were irrelevant and "this is a self-defense case."

"Andrew Hall fired those shots to protect himself from being run over by a car," Stern said. "It's that simple."

Danville police tried pulling Arboleda over multiple times, only to see the Newark man pull away from them. At one point, they drew their guns without shooting, as Arboleda drove away.

Hall was only involved at the very end, when he pulled in front of Arboleda at the corner of Front and Diablo.

As Hall got out of his vehicle and came around to the other side, Sgt. Chris Martin pulled up on the other side, effectively creating a "tunnel" according to defense attorneys, through which Arboleda started driving at what both sides agree was a speed of 6 miles per hour.

Martin, who has since retired and wasn't in court Thursday, previously testified he feared for his life when Hall started firing.

Hall's lawyers said shooting Arboleda may have saved Hall's life, causing the vehicle to straighten out before it moved across the intersection and struck another vehicle.

"Laudemer was never trying to hit officer Hall," said Gleason. "He was trying to get out."

Gleason pointed out that much of the defense's arguments were based on computer simulation of the scene, while prosecutors relied on multiple dashcam and body cam footage of the officers. She compared their case to the film "The Matrix."

"It tells you how damming the real evidence is," Gleason said.

She also said Hall's only concern was to end the pursuit, not save his own life.

"Failure to obey a police officer does not carry a sentence of death," Gleason sad. "Laudemer is not on trial here."