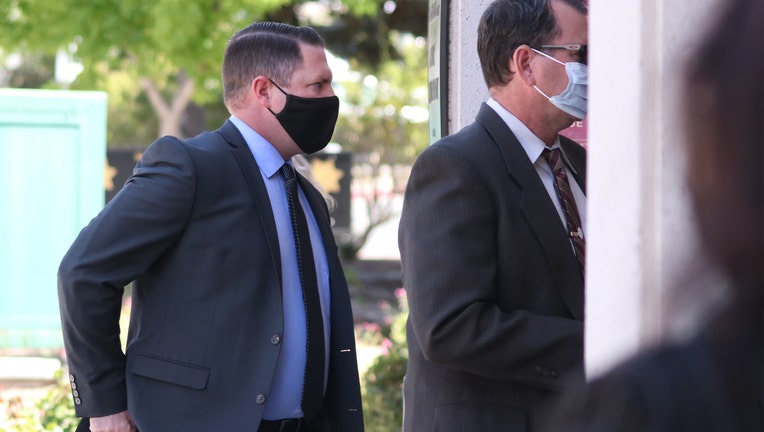 Danville Police officer, Andrew Hall, center, heads into his preliminary hearing at the A. F. Bray Courthouse in Martinez, Calif., on July 20, 2021 for the death of Laudemer Arboleda. (Harika Maddala/Bay City News)

MARTINEZ, Calif. - After deciding not to call Andrew Hall to testify, the defense rested Wednesday in the Contra Costa County sheriff's deputy's manslaughter trial in Martinez.

Arboleda, 33, led police on a slow speed chase through Danville after police repeatedly tried pulling him over. Officers were responding to a complaint about Arboleda knocking on doors.

The pursuit ended at the intersection of Diablo Road and Front Street, with two police units behind Arboleda's gray Honda Civic, and two in front, including Hall's.

Arboleda was apparently trying to pull between police cars, when Hall opened fire from the front passenger side of Arboleda's car, hitting the Newark man nine times. He died at the scene.

Hall pleaded not guilty to voluntary manslaughter and assault with a firearm. His lawyers have said Hall feared for his safety, and used body cam footage to allegedly show the car was pointed at Hall when the shooting started.

Prosecutors have said Hall didn't follow department procedure and kept firing, even as the car passed him. Retired Danville Police Sgt. Chris Martin, whose car was on the other side of Arboleda's as it drifted past Hall, has said in court he feared for his safety while Hall fired 10 times.

Prosecutors have also said Arboleda was unarmed and suffered from mental illness and didn't break any laws until the police pursuit.

Defense attorneys have argued that Hall had no choice and that Hall altered the car's path by shooting Arboleda. They car ended up drifting across Diablo Road, where it struck another car.

Mockler went over what the jury can and can't legally consider during deliberations to meet the legal standards of self-defense and guilt beyond a reasonable doubt in both charges.

At issue is whether the jury thinks Hall believed he or others were in imminent danger from Arboleda's car and whether Hall illegally used more force than required to keep himself and others from that danger, among other considerations.

Hall was involved in another shooting in March 2021, when he shot and killed 32-year-old transient Tyrell Wilson near the Sycamore Valley Road overpass of Interstate Highway 680. Police say Wilson was approaching Hall with a knife.

Mockler ruled last month the 2021 case can't be used against Hall during the trial. Authorities are still investigating the second shooting, and no charges have been filed.