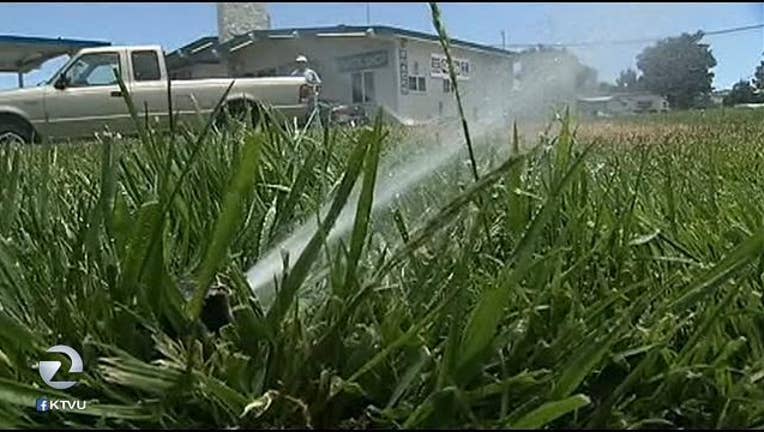 CONTRA COSTA COUNTY, Calif. (KTVU and wires) -- Beginning Thursday, Contra Costa Water District customers will have to begin cutting back their water consumption by at least 25 percent or face additional charges on their water bill, according to a district spokeswoman.

Residents will be expected to cut back from the amount of water they used in 2013, district spokeswoman Jennifer Allen said.

That's a change in the baseline for the district, which previously asked customers to reduce water usage by 15 percent based on average water usage from 2005, 2006 and 2007, according to Allen.

The water district's board of directors voted Wednesday to add a charge for households that use more than 200 gallons per day on average. The charge would be 50 cents for every water unit -- or 748 gallons per day -- consumed above that mark.

All ratepayers will be charged the extra 50-cent-per-unit premium, but Allen said those who stay below the 200-gallon daily average will receive a credit to reduce their bill.

Allen said that on average, customers currently use roughly 320 gallons per day.

In April, Gov. Jerry Brown implemented the first-ever statewide mandatory water reductions. The Contra Costa Water District was initially directed to reduce water consumption by 25 percent, but Allen said that number has since been increased to 28 percent.

She said the district expects to achieve its 28 percent reduction goal by requiring both residential and commercial customers to reduce water usage by 25 percent and requiring irrigation customers to save 45 percent compared to their 2013 baseline.

The board has also approved several prohibitions that could result in a $250 fine for the second offense or a $500 fine for the third offense.

Allen said at this point, most of the feedback has been in the form of questions.

"People want to understand what their 2013 water use was because that is a change from what we were comparing people to before," Allen said. "People are also looking for clarification for what the state has mandated."

The water district mailed 2013 baseline and target figures to customers Thursday so they know how much to conserve, Allen said.

"People are paying attention and the message is getting through," Allen said. "People understand the seriousness of the drought."

Customers who are looking for general conservation tips can visit ccwater.com. Customers with specific questions about their own account can email a request for assistance through the district's website or call (925) 688-8044.