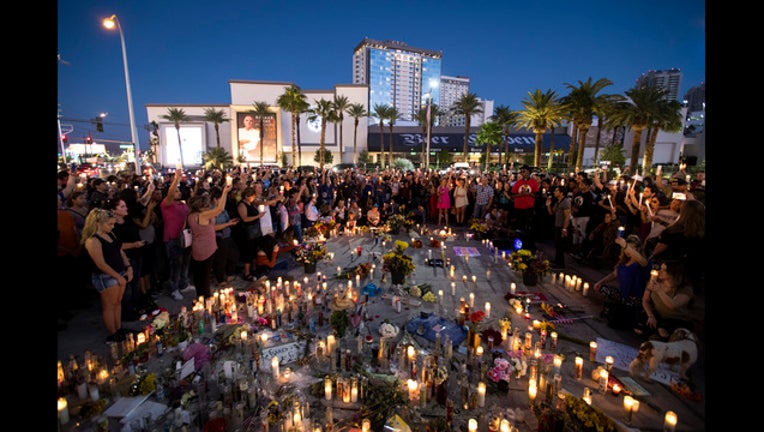 Mourners hold their candles in the air during a moment of silence during a vigil to mark one week since the mass shooting at the Route 91 Harvest country music festival on October 8, 2017 in Las Vegas, Nevada. (Photo by Drew Angerer/Getty Images)

All 58 victims of the Las Vegas mass shooting died of gunshot wounds, a coroner said Thursday, revealing that no one was trampled to death trying to escape from an outdoor concert that turned into a massacre.

The only wound to the shooter, Stephen Craig Paddock, 64, was a self-inflicted gunshot to the mouth, Fudenberg said. The death was ruled a suicide.

Twenty-one people were shot in the head, 36 died with chest and back wounds and one died of a gunshot to the leg, according to a chart the coroner released. Four victims had multiple gunshot wounds.

Authorities have said more than 500 people were injured when Paddock, a high-stakes video poker gambler, unleashed gunfire from an upper floor of a high-rise casino hotel onto an outdoor country music festival below.

Some have described receiving injuries other than gunfire during their escapes.

Police and the FBI have not said publicly what they think motivated Paddock to amass an arsenal of assault-style weapons and ammunition in a two-room suite and then rain bursts of gunfire for 10 minutes from the 32nd floor of Mandalay Bay into a crowd of 22,000 people at the Route 91 Harvest Festival below.

They also haven't said why they think he stopped shooting. They say he killed himself before officers reached his room.

Fudenberg said autopsy reports in the case are not yet complete.

Paddock's brain was sent to Stanford University in California to study after a visual inspection during found no abnormalities.