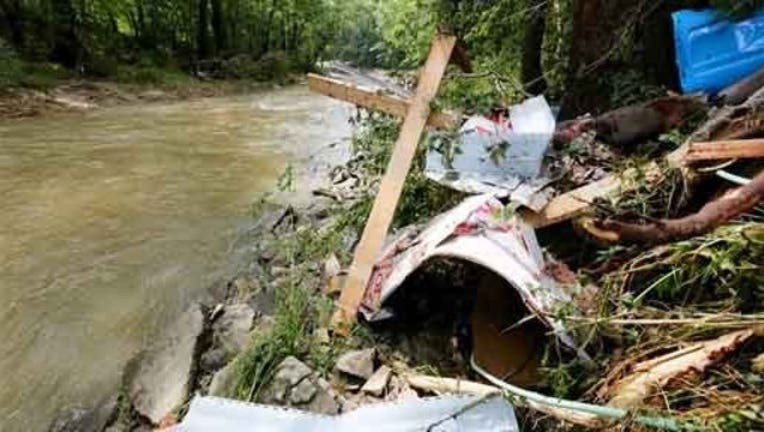 RIPLEY, Ohio (AP) — A pregnant woman was killed along with two of her children when their mobile home was swept away during a weekend torrential downpour, a coroner said Monday as authorities began assessing damage to homes and roads in southern Ohio.

Brown County Coroner Dr. Judith Varnau identified the woman as 32-year-old Victoria Kennard. Varnau said Kennard was pregnant, but she hadn't determined how far along the woman was.

Also killed when their mobile home in Ripley was swept away late Saturday were two of Kennard's children, 7-year-old Gabriel Barrios and 5-year-old Rosa Barrios.

Her fiance and two other sons were rescued. Authorities said one of the boys was found in a tree.

Neighbor Jeff Downing, Kennard's half brother, said his home likely was ruined by the flooding. He wasn't home at the time.

He said Kennard and Marco Barrios, a construction worker, were engaged to be married.

"They were really good parents," Downing told The Cincinnati Enquirer. "They were just trying to make it like everybody else."

He and other relatives and friends followed a trail of debris to pick up photos and other keepsakes on Sunday.

She said at least two mobile homes were destroyed and flood damage was reported to at least five other homes. The floodwaters receded quickly, Nevel said, and the Brown County Health Department is assessing sanitation issues and urging people to take precautions during cleanup work by using gloves, boots and common sense.

Authorities said earlier that one road in Ripley was buckled by rushing water. Several streets in the county seat of Georgetown were also flooded over the weekend.

The village of fewer than 2,000 people is about an hour's drive southeast from Cincinnati.