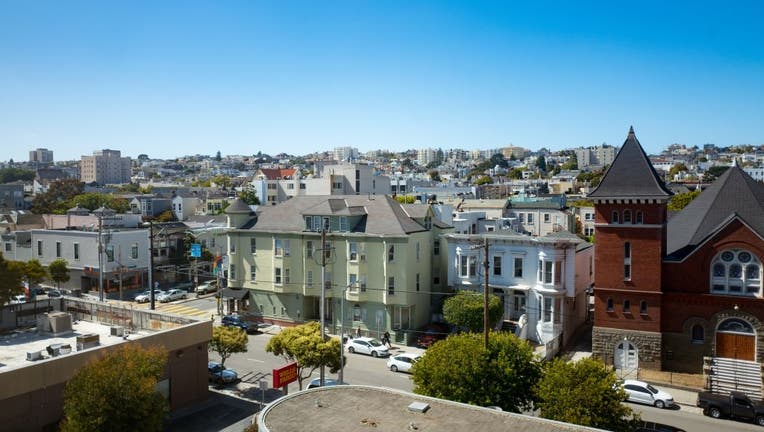 Aerial view of the Pacific Heights neighborhood of San Francisco, California on a sunny day, with Saint Dominic's Catholic church visible in the foreground, August 2, 2018. (Photo by Smith Collection/Gado/Getty Images)

SAN FRANCISCO - Tall trees are venerated across California, but one towering Monterey Pine at the center of a heated dispute in San Francisco’s wealthiest neighborhood has to go, according to an appeals court ruling this week.

A state appeals court on Wednesday ordered a couple in the hilltop Pacific Heights neighborhood to remove the tree, which is at least 32 feet (10 meters) tall. A neighbor argued the tree was blocking her view of the San Francisco Bay and other city landmarks, the San Francisco Chronicle reported.

The neighbor is an 81-year-old woman who had moved into the San Francisco home with her now-deceased husband in 1976. When the couple "saw the magnificent views, they were sold," said Barri Bonapart, the woman’s lawyer.

"You could see all the way from Marin Headlands, out to the Pacific Ocean, and then the Golden Gate Bridge, Palace of Fine Arts, Sausalito, Belvedere, Tiburon and Angel Island," Bonaparte said. She said her client asked to withhold her name because she was afraid of being harassed.

The pine was planted by a prior resident in 1999 and, by the time the case went to trial in 2019, had grown dozens of feet tall with widening, thickly growing branches. The lawsuit was filed in 2018 after mediation failed.

The woman "tried everything she could to work with her neighbors to find a collaborative solution," Bonapart said. "Unfortunately, they were always adamant that they would never agree to restore her views unless they were ordered to."

Superior Court Judge Jeffrey Ross visited the site before issuing a December 2019 ruling to remove the pine, citing a San Francisco ordinance that seeks to resolve treetop feuds. He ruled that "the tree’s rapid growth in both height and breadth obstructs the views of landmarks and vistas that could once be seen."

Upholding Ross’ order, the First District Court of Appeal ruled Wednesday that the only workable solution in this case was to remove the tree.

Pruning might have worked when the pine was smaller, but it has grown too much now to be thinned or topped in a way that would restore the view, Justice Ioanna Petrou said in the 3-0 ruling. She cited arborists’ testimony that the tree provides little shade or privacy to the homeowners and could be cut down without disturbing the soil. Under the ordinance, both households would share the costs of removal, which an arborist has estimated at $1,800.

The exclusive neighborhood of Pacific Heights, famous for its pricey mansions and breathtaking views, is no stranger to tree disputes.

Larry Ellison, the billionaire chief executive officer of Oracle Corp., sued a downhill neighbor in 2011 to seek removal of three redwoods and an 80-year-old acacia he said were blocking his view of the bay. The suit was settled with an agreement to trim the trees.