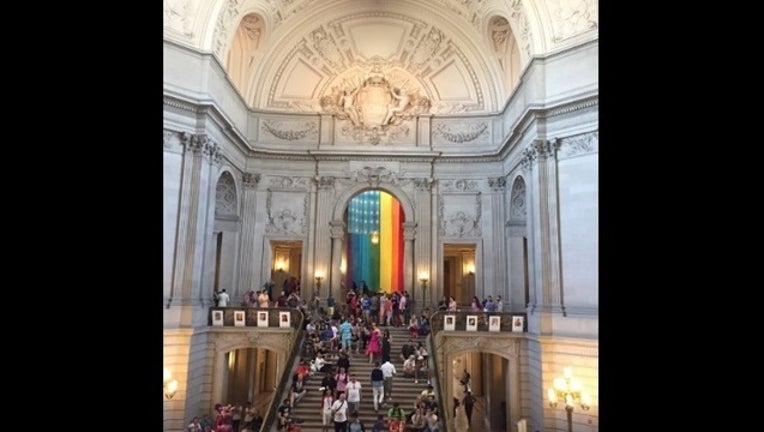 CHICAGO (AP) -- A federal appeals court in Chicago on Tuesday ruled that the 1964 Civil Rights Act also protects LGBT employees from workplace discrimination, the first time a federal appellate court has come to that conclusion.

The decision by the full 7th U.S. Circuit Court of Appeals in Chicago comes just three weeks after a three-judge panel in Atlanta ruled the opposite, saying employers aren't prohibited from discriminating against employees based on sexual orientation.

It also comes as President Donald Trump's administration has begun setting its own policies on LGBT rights. Late in January, the White House declared Trump would enforce an Obama administration order barring companies that do federal work from workplace discrimination on the basis of sexual identity. But in February, it revoked guidance on transgender students' use of public school bathrooms, deferring to states.

The Hively case stems from a lawsuit by Indiana teacher Kimberly Hively alleging that the Ivy Tech Community College in South Bend didn't hire her full time because she is a lesbian.

The entire court reheard oral arguments in November and directed the toughest questions at a lawyer for the college who argued only Congress could extend the protections. The aggressive questions suggested the court might be willing to expand the 53-year-old landmark law.

Judge Richard Posner asked the attorney for the community college, John Maley: "Who will be hurt if gays and lesbians have a little more job protection?" When Maley said he couldn't think of anyone who would be harmed, Posner shot back, "So, what's the big deal?" Posner also said it was wrong to say a decades-old statute is "frozen" on the day it passed and that courts can never broaden its scope.

Eight out of the 11 judges who reheard the case, including Posner, were appointed by Republican presidents.

The ruling comes as hopes have dimmed among some gay rights activists that the question will be resolved in their favor following election victories in November by Republicans.

The issue could still land before the Supreme Court at some point. A GOP-majority House and Senate make it unlikely the Congress will amend the statute.

The focus of discussion at the November session in Chicago was the meaning of the word `sex' in Title VII of the Civil Rights Act, the provision that bans workplace bias based on race, religion, national origin or sex. Multiple court rulings back Maley's contention that Congress meant for the word to refer only to whether a worker was male or female. Given that, he said it would be wrong to stretch the meaning of `sex' in the statute to also include sexual orientation. He conceded the law is imprecise, but added: "That makes it an issue for Congress."

The lawyer representing the teacher, Gregory Nevins of the Lambda Legal advocacy group of LGBT rights, pointed to what he described as the absurdity of a 1980s Supreme Court finding that if workers are discriminated against because they don't behave around the office by norms of how men or women should behave, then that does violate the Civil Rights Law. But if a man or woman is discriminated against at work for being gay that was found not to violate the Civil Rights Act.

"You can't discriminate against a woman because she rides a Harley, had Bears tickets or has tattoos," he said. "But you can if she's lesbian."