Former Secretary of State Mike Pompeo addressed the crowd Saturday afternoon in a session titled "How the Bill of Rights Inspires Us at Home and Across the World."

He touted the work of the Trump administration over the last four years and how the fight to resist socialism and "woke cancel culture" continues. "The next four years are going to test us," he said to the crowd. He encouraged them all to "be a pipe hitter" and "keep grinding."

"Be a pipe hitter at church, at your PTA meeting; don’t let them bring crazy into your classrooms, into your VFW," he said. "Be a pipe hitter when they tell you they’re closing the mine or the factory because of some green vision. Keep it open."

"Mark my words, they’re going to gut the defense budget we worked so hard to build," he said of the Democratic party.

RELATED: CPAC schedule: Who is speaking at the Conservative Political Action Conference in Florida

His comments reference New York Rep. Alexandria Ocasio-Cortez, who is known by her initials AOC and introduced the Green New Deal Resolution to address climate change policies. The plan has been widely criticized by the GOP.

He got the crowd cheering and up on their feet twice during his remarks, first when he referenced the Abraham Accords, a series of Mideast agreements, and secondly when said he was proud to have been part of the most pro-life administration in the history of the country. 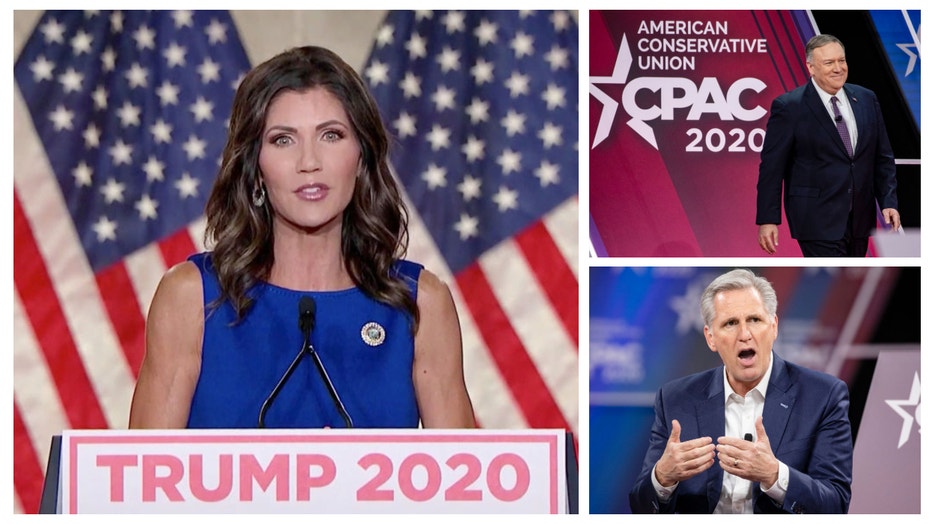 Gun rights advocates saw a panel on the Second Amendment.

Noem gained national attention during the COVID-19 pandemic when she refused to shut down the Mount Rushmore State, spoke about her decision to allow schools and businesses to remain open.

"I believe South Dakota has been an example to the nation this past year. People used personal responsibility to protect their family’s health and their way of life, while their government respected their rights and freedom," Noem said.

said that people themselves are primarily responsible for their own health and well-being, and that no governor should ever fine, ticket or arrest people "for exercising their personal freedoms."

As of Feb. 27, South Dakota recorded 112,293 cases of COVID-19, which accounts for the ninth fewest cases in the country. South Dakota has a population of 884,659, making it the sixth least populous state.

According to data collected by Johns Hopkins University, 1,886 died from the novel coronavirus in the state.

The conference continues on Sunday, its last day, with remarks from former president Donald Trump scheduled to close out the annual event.

This story was reported from Atlanta. Fox News contributed.