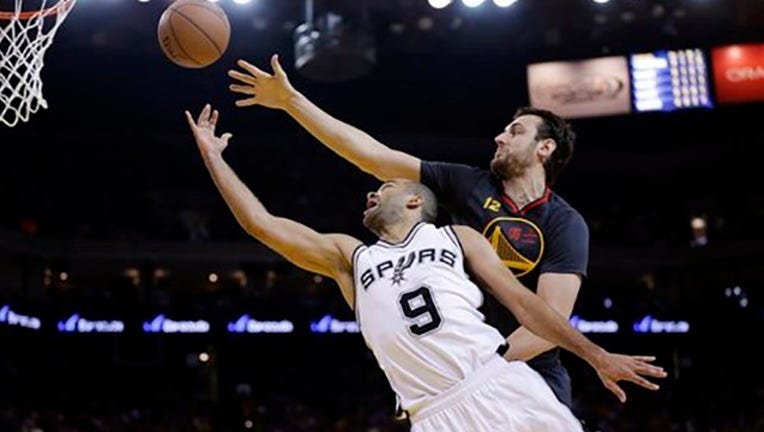 Curry controlled the game the way he so often has this season, burnishing his MVP credentials by leading Golden State to big runs at the end of the second and third quarters.

The Warriors went ahead by 21 points entering the fourth, and Spurs coach Gregg Popovich rested his regulars the final 12 minutes.

Aron Baynes had 12 points and 10 rebounds, and Kawhi Leonard scored 12 points for San Antonio, which lost 119-115 at the Los Angeles Clippers on Thursday night in its first game back.

The Spurs are in the middle of a season-long nine-game trip sandwiched around the break, going 2-3 so far. It was the lone home game for the Warriors during an 11-game stretch wrapped around All-Star weekend.

Despite the travel and time away, neither team looked rusty.

The league-leading Warriors (43-9) and defending NBA champions Spurs (34-21) put on a back-and-forth show that featured a fast pace and beautiful ball movement. But the game wasn't always clean — San Antonio had 16 turnovers, and Golden State had 12. And it wasn't always calm, either.

Things intensified late in the second quarter when Curry was called for reaching in, waving his arms and screaming madly after the whistle. Curry and Warriors coach Steve Kerr received consecutive technical fouls for arguing with an official, whipping what had been a stagnant sellout crowd of 19,596 into a frenzy.

The Warriors ended the half on a 21-11 run over the final five minutes. Curry connected from 3-point range and converted a behind-the-back, left-handed layup during the spurt, sticking his tongue out while running to the other end.

Golden State led 62-55 at intermission and scored the first seven points of the third quarter. Curry closed the quarter with another flurry, hitting a step-back 3 and finding Andre Iguodala in the corner to put the Warriors up 89-68 heading to the fourth.

Popovich never played his Big Three — Tim Duncan, Tony Parker and Manu Ginobili — in the fourth, and the final margin made the outcome seem closer than it really was. Instead, it was a rare night that Golden State could celebrate a victory over the NBA's model of consistency.

For the last two decades, San Antonio has dominated the Warriors like no other team. The Spurs swept the series last season and had won 53 of the last 61 games against Golden State.

The Warriors came into the game with the best home record in the NBA at 23-2. One of those losses came to San Antonio, which beat the Warriors 113-100 on Nov. 11, despite Golden State shooting 54.3 percent from the floor. Chicago is the only other team to win at Oracle Arena this season.