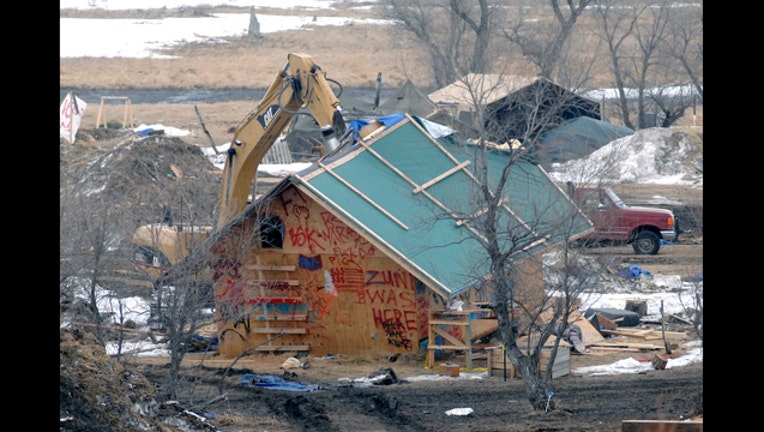 A backhoe rips through a wood structure to begin the cleaning up process at the Oceti Sakowin camp as law enforcement swept through the camp arresting the final Dakota Access oil pipeline protesters. (Mike McCleary/The Bismarck Tribune via AP, Pool)

CANNON BALL, N.D. (AP) -- Authorities on Thursday cleared a protest camp where opponents of the Dakota Access oil pipeline had gathered for the better part of a year, searching tents and huts and arresting dozens of holdouts who had defied a government order to leave.

It took 3 1/2 hours for about 220 officers and 18 National Guardsmen to methodically search the protesters' temporary homes. Authorities said they arrested 46 people, including a group of military veterans who had to be carried out and a man who climbed atop a building and stayed there for more than an hour before surrendering.

Native Americans who oppose the $3.8 billion pipeline established the Oceti Sakowin camp last April on federal land near the Standing Rock Indian Reservation to draw attention to their concerns that the project will hurt the environment and sacred sites -- claims Dallas-based pipeline developer Energy Transfer Partners disputes. The camp gained increased attention starting in August after its population had grown and authorities made their first arrests. At its height, the camp included thousands of people, but the numbers had dwindled during the winter and as the fight over the pipeline moved into the courts.

The Army Corps of Engineers said it needed to clear the camp ahead of spring flooding, and had ordered everyone to leave by 2 p.m. Wednesday. The agency said it was concerned about protesters' safety and about the environmental effects of tents, cars, garbage and other items in the camp being washed into nearby rivers.

Most protesters left peacefully Wednesday, when authorities closed the camp, but some stayed overnight in defiance of the government order.

Before the arrests, protester Ed Higgins 39, of Lowell, Massachusetts, said by phone from the camp that morale was high and opponents were prepared to stay as long as necessary. Protesters maintain that the camp was on land that rightfully belongs to American Indians under old treaties.

"They do not own the land. They do not have the right to be here," said Higgins, who did not answer his phone after authorities cleared the camp.

As police in full riot gear worked to arrest the stragglers, cleanup crews began razing buildings on the square-mile piece of property at the confluence of the Cannonball and Missouri rivers.

American Indian activist Chase Iron Eyes, an outspoken supporter of the camp, said its shutdown isn't the end of the fight against the pipeline.

"The battleground has shifted to the legal courts and the court of public opinion," he said, referring to lawsuits filed by tribes and an effort planned by the Lakota People's Law Project to rally lawmakers and others in Washington, D.C., to their cause.

Authorities entered the camp "cautiously and tactfully" to ensure the safety of officers and protesters, according to Highway Patrol Lt. Tom Iverson. The arrests were a last resort, he said.

"We did not want this. Unfortunately, there were some bad actors that forced us into this position," he said.

Only one person resisted arrest; otherwise there were no major incidents, and there were no injuries, Morton County Sheriff Kyle Kirchmeier said.

Afterward, officers showed visible relief, smiling, shaking hands and patting one another on the back.

Guardsmen and officers entered the camp from two directions shortly before midday, alongside numerous law enforcement and military vehicles and with a helicopter and airplane overhead. As they checked and cleared buildings, they marked them with a fluorescent orange "X."

They declared the camp cleared shortly after 2 p.m., though Morton County Sheriff Kyle Kirchmeier said 15 protesters crossed the frozen Cannonball River on foot to the south bank. That land also is Corps-managed but is on the Standing Rock Reservation, where North Dakota authorities don't have jurisdiction. They planned to station officers on the north shore to keep anyone from re-entering the camp.

Before authorities moved in, Gov. Doug Burgum had said those remaining at the camp still had a chance to leave without facing charges. The state sent a bus to the site on Thursday to transport anyone to Bismarck, where officials were doling out basic necessities, along with hotel and bus vouchers.

No one took advantage of the offer Thursday, and only nine people used the center Tuesday and Wednesday. The center was closed Thursday due to the lack of use, state Emergency Services spokeswoman Cecily Fong said.

Energy Transfer Partners began work on the last big section of the oil pipeline this month after the Army gave it permission to lay pipe under a reservoir on the Missouri River. When complete, the pipeline will carry oil through the Dakotas and Iowa to a shipping point in Illinois.