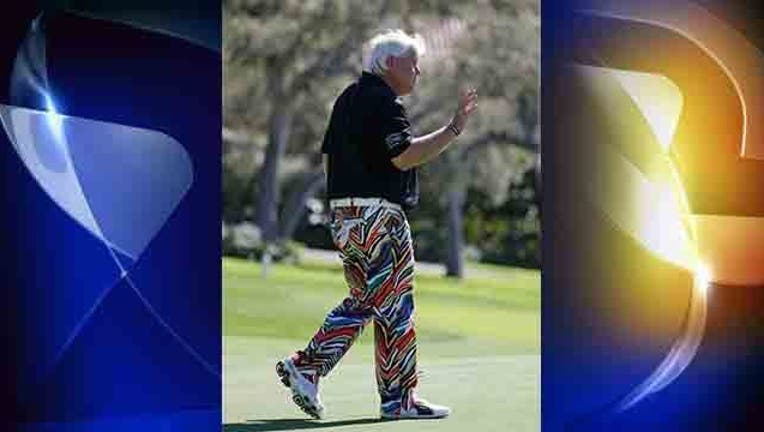 PEBBLE BEACH, Calif. (AP) — Sunshine is always a pleasant surprise at Pebble Beach, and Thursday brought a real stunner: John Daly was near the top of the leaderboard.

With his best opening round on the PGA Tour in nearly 10 years, Daly kept a clean card at Pebble Beach on a magnificent day along the Monterey Peninsula for a 7-under 65, leaving him one shot behind J.B. Holmes and Justin Hicks in the AT&T Pebble Beach National Pro-Am.

Daly won an exhibition in Turkey last year. The last official win for the two-time major champion was at Torrey Pines in 2004. So when Daly rolled in a 15-foot birdie putt on his final hole, one of the volunteers wasn't joking when he said, "Daly is at 7 under? On his own?"

Daly laughed when he heard that. Then again, this day could put anyone in a good mood.

His golf was as glorious as the sunshine. Three years ago, a beautiful day gave way to fog and then rain without notice in a two-hour span. Last year, the third round was ravaged by rain and 30 mph win. Thursday brought long shadows.

Hicks and Holmes each shot 8-under 64 at Pebble Beach, typically the easiest course in the rotation in benign conditions.

Furyk, former Pebble winner Brandt Snedeker and Chesson Hadley were at 7-under 64 at Monterey Peninsula, while J.J. Henry and Dudley Hart joined Daly at 65 at Pebble Beach. The low score at Spyglass Hill belonged to Alex Prugh at 6-under 66.

Jason Day, coming off a playoff win at Torrey Pines that included Holmes, struggled to a 72 at Pebble Beach. He wasn't even the low Day in the day. Glen Day, in his final year before he is eligible for the Champions Tour, shot a 5-under 66 at Monterey Peninsula.

Holmes had a start as ideal as the weather. He holed a wedge from 123 yards on the 10th hole for eagle, and then hit another wedge to 5 feet for birdie on No. 11. For all his length, he only birdied one of the par 5s, and that was with a 20-foot putt.

Even so, it was good way to forget last week, where he lost on the second playoff hole.

"I've just got to keep reminding myself it was a great week for me, and I did everything I could do and just carry that on to this week and maybe things will go a little bit different this week," he said.

Hicks saved his best for the final hole, reaching the par 5 in two and making an 18-foot eagle putt. His week began with a big laugh. His back felt tight, so Hicks went to see a local chiropractor to relieve some of the pain. Then he went to the tour's chiropractor, who told him his glutes weren't activating.

"I almost fell off the chair," Hicks said. That was the phrase Tiger Woods used last week when he withdrew after 11 holes. "I never quite used that term myself to describe an injury. I never really even heard that term. So to have him tell me that, I was just thinking, 'You're kidding, right?'"

Daly, however, caused the biggest stir. It was his best start since a 64 in the Byron Nelson Championship in 2005.

He can deliver a good round — or win a major, for that matter — out of nowhere. Still, this wouldn't seem to be the place for it. Daly tied for 20th at Pebble Beach in his rookie season in 1991 and he hasn't made the cut in 10 tries since then. And he still hasn't.

"That wouldn't shock me," Daly said when told of his record. "I still haven't made it yet."

Next up is a trip to Monterey Peninsula, and Daly isn't sure what to expect. Part of him was still in shock over the colors — emerald green on the fairways, blue in the ocean and that big yellow ball in the sky, always a welcome guest.

Of course, he had those colors and more in the pattern of his Loudmouth pants. Daly said that pattern is called, "In the Jungle."

"I'm just glad I didn't shoot something in jungle today," he said.

It was a simple round, or at least he made it look that way. Daly only missed three fairways and took 26 putts, two areas of his game that have cost him over the years. And for all the great golf he played, he couldn't stop talking about the weather. He usually only sees Pebble like this on a postcard.

"It's just great to be able to come out here and not have to survive the weather and survive the golf course," he said. "But we'll just see what happens."

It wasn't clear if he was talking about the weather or his game.