The deaths occurred in Belmont, Napa and Brentwood just before the sun came up on Thursday morning. Others sustained injuries and the California Highway Patrol urged drivers to be more safe on the roads.

According to the California Highway Patrol, a 41-year-old San Francisco woman died on U.S. Highway 101 at Ralston Avenue in Belmont in a four-car collision about 3 a.m.

The CHP said the woman was driving a green 1991 Honda Accord – and was possibly in a prior hit-and-run – when her blocked car on the highway caused a chain collision of three other cars.

The San Francisco woman ended up dying even though citizens tried to perform CPR on her and paramedics took her to Stanford Medical Center. Officers did not identify her or state why they thought she might have been involved in a prior collision.

The others sustained minor injuries and were taken to hospitals.

In the second death, a 32-year-old Napa man walking on the highway was struck by the driver of a 2005 Honda Odyssey. The CHP said he had walked into traffic.

He was pronounced dead on state Route 221 at Streblow Drive near Napa Valley College about 5 a.m., according to the CHP.

The road was closed for about 90 minutes.

There was a fiery crash on the Carquinez Bridge.

And at about 6 a.m., the driver of a Toyota Corolla died in a three-car collision on Vasco Road south off Walnut Boulevard in Contra Costa County near Brentwood.

The CHP said that two others were taken to John Muir Medical Center in Walnut Creek. Their injuries were unknown.

Video at the scene showed a Ford F-350 truck and and the Toyota Corolla were left nearly destroyed. Debris was strewn across the roadway, nestled alongside bucolic grape vineyards.

An officer told KTVU that one of the vehicles crossed over a double solid line, causing the crash. Officers did not specify which vehicle crossed over.

The driver of the Ford suffered major injuries, the CHP said, and a passenger in the Toyota suffered minor injuries. Both were taken to the hospital.

Arthur Campbell, who was spared any injury alongside his passenger, said he saw the head-on collision and was grateful he wasn't hurt. He said he heard the driver of the truck screaming that his leg was stuck and he saw people in the sedan slumped over.

"I'll never forget this Thanksgiving," he said. "It started off very slow. But this is just a wild way to start off Thanksgiving."

Even before the fatalities, the CHP reminded everyone to drive safely over the holiday weekend.

The agency kicked off a maximum enforcement period after sundown Wednesday night looking for unsafe driving practices, including seat belt violations, speeding, distracted driving, and signs of driving under the influence.

Officers say anyone who will be drinking should arrange for a safe ride home.

The maximum enforcement periods runs through the weekend, ending at midnight on Sunday. 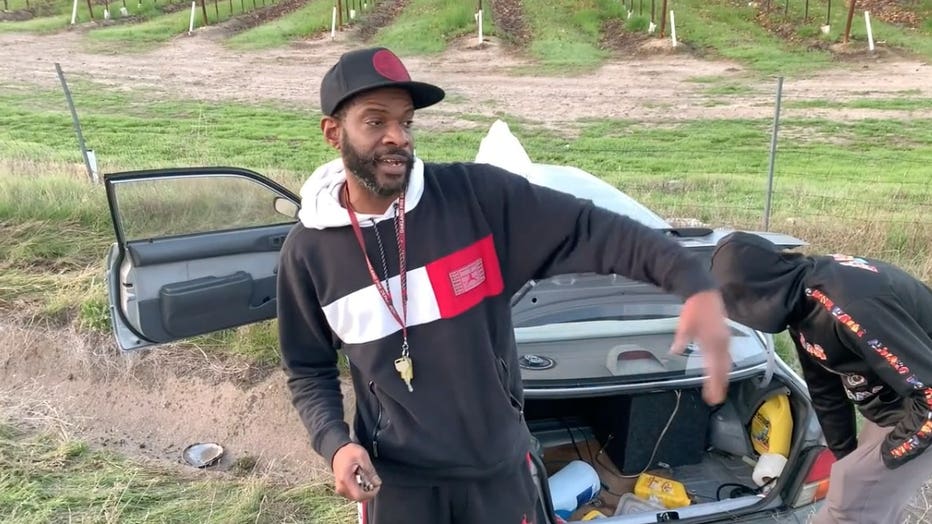 Arthur Campbell was not injured during a fatal crash on Vasco Road. Nov. 25, 2021 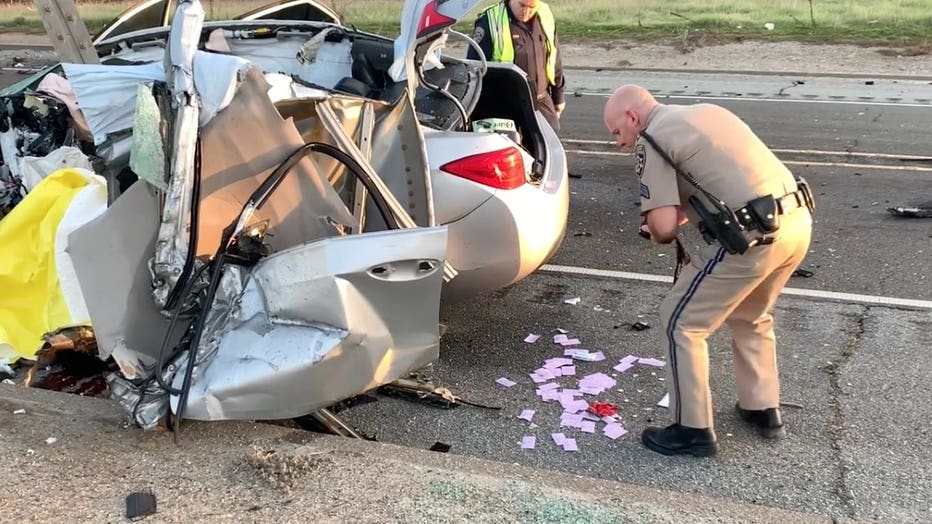 A CHP officer looks at a sedan on Vasco Road near Brentwood following a fatal crash on Thanksgiving. Nov. 25, 2021 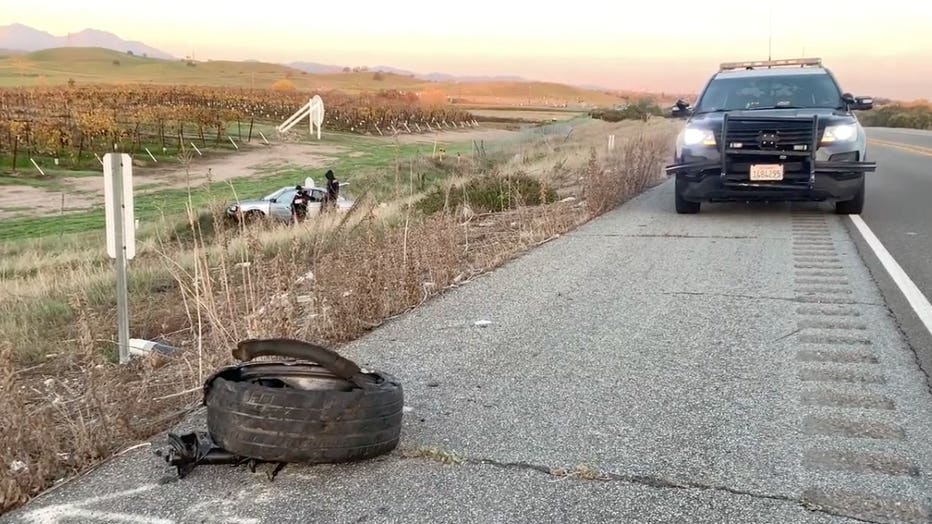 A tire was left in the road on Vasco Road near Brentwood following a fatal crash on Thanksgiving. Nov. 25, 2021 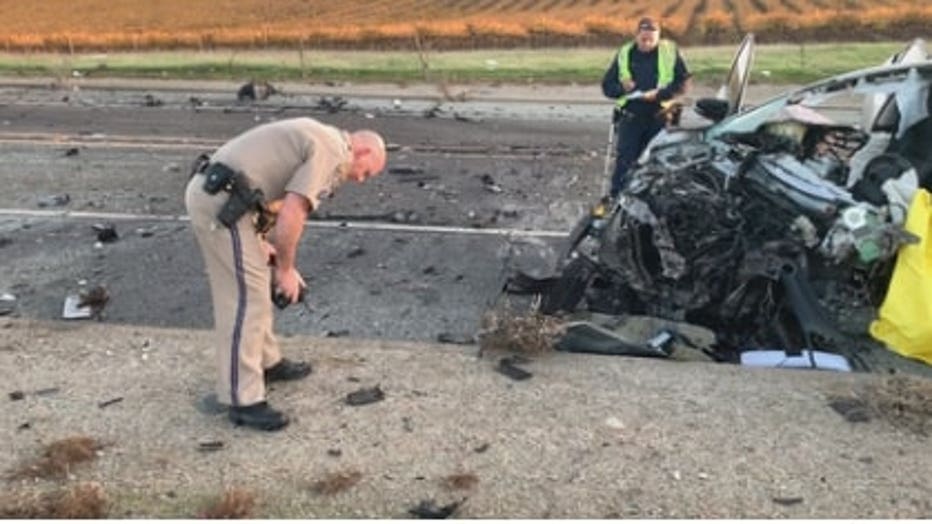 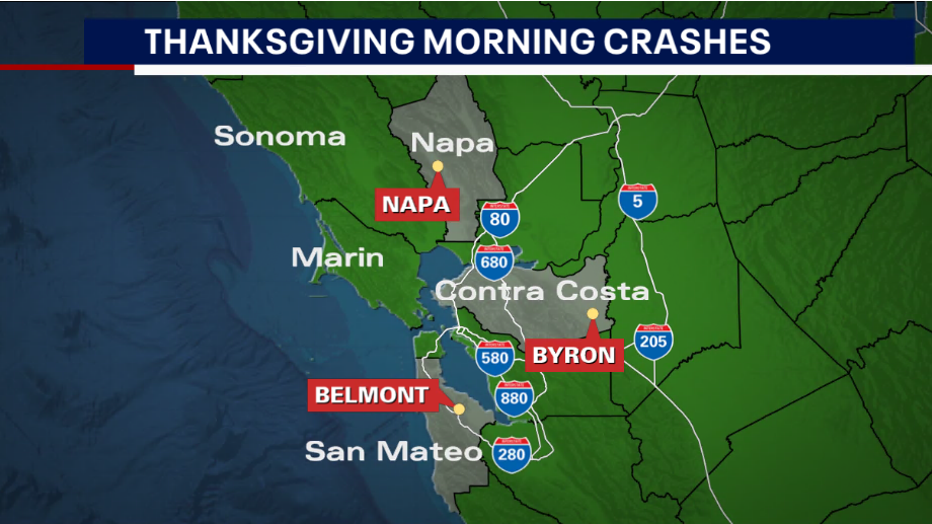