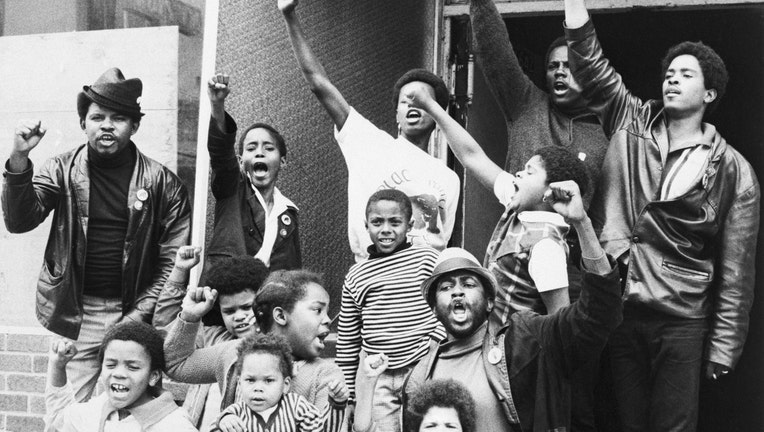 OAKLAND, Calif. - It once would have been unthinkable for a city to erect a monument to Huey P. Newton.

The Black Panther Party co-founder was feared and hated by many Americans, and party members were dismissed as racist, gun-toting militants — Black avengers who believed violence was as American as cherry pie.

But the unthinkable has happened — in Oakland, the city of the party’s founding 55 years ago. In an unrelenting deluge on an October Sunday, Newton’s widow Fredrika and sculptor Dana King unveiled a bronze bust of Newton.

It is true that aside from Oakland, where the Panthers were born and Newton was murdered, there are few places where such a bust would be welcome; there is probably no other place in the world that could place his statue at an intersection of Dr. Huey P. Newton Way and Mandela Parkway, named for the late South African revolutionary Nelson Mandela.

And it would be wrong to suggest that the Panthers are enjoying a resurgence, or even a moment; the party disbanded almost 40 years ago.

But it is also true that in 2021, some activists and historians are taking another look at the legacy of the Panthers through a less-freighted lens. The Panthers, they say, were a harbinger of today’s identity politics, helped shape progressivism, and have served as grandfathers and grandmothers to the Black Lives Matter movement.

"You have the detractors who only see (the Panthers) as a militia, and then you have the folks who are actually happy for that because the times required it," said Robyn Spencer, an associate professor of history at Lehman College in New York City.

Much of the party’s story has often been overshadowed by its association with violence. The Black Panther Party has been seen as an organization that sought war with police, a group doomed by infighting, infiltration and corruption among its leaders.

Yet over its 15 years of operation, the party and its politics were a training ground and an inspiration for a generation of Black, Latino, Asian, Native American and white people who hold public office or public platforms today. Some of the party’s biggest accomplishments, like its community service programs, helped transform public education and health care.

Fredrika Newton, who co-founded the Dr. Huey P. Newton Foundation in Oakland, is among those who want to retell the Panthers story for a new generation. She said the bronze bust is just a start of a larger effort to see the Black Power movement take its place in history with other, less confrontational actors of the civil rights movement. Among her goals: recognition of Panther sites by the U.S. National Park Service.

"You’re hearing more about the Black Panther Party, and Huey’s contributions to (Black) liberation as a thought leader, than you’ve ever heard before," she said. 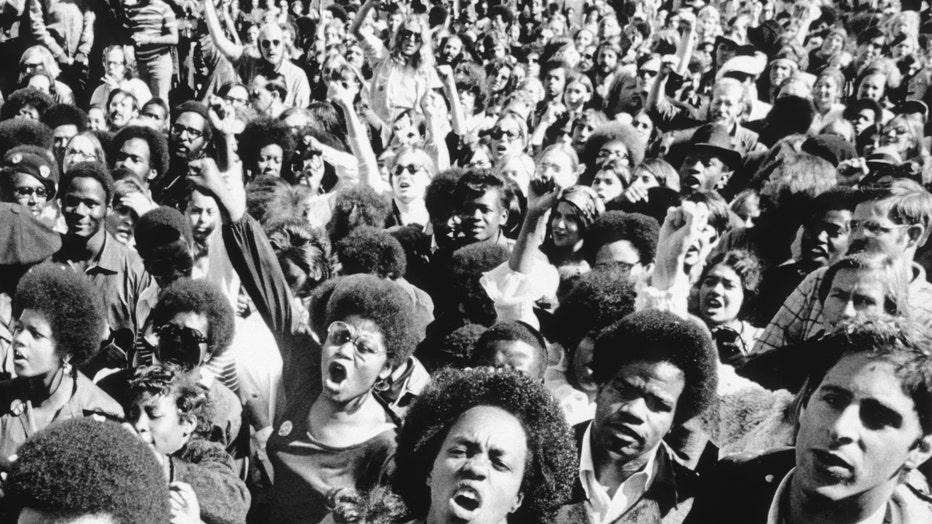 After meeting at a community college in Oakland, Newton and Bobby Seale founded the Black Panther Party for Self Defense in October 1966. Newton was the party’s minister for defense and Seale was the party chairman.

Together, they wrote the party’s Ten Point Program, laying out the party’s beliefs. Among their demands: Freedom to determine the destiny of the Black community, economic empowerment through full employment and wealth redistribution, an educational system inclusive of the Black experience, and an end to brutality and fatal encounters between Black people and police.

The party became famous in its early years for its men and women in matching black berets and black leather jackets, sometimes accessorized by long-barrel shotguns. And there were the Panther formations, marches and patrols, meant as a show of discipline and strength.

In interviews, former Panther members acknowledged that the party’s very name drove perceptions that it only operated by force and intimidation. The party eventually dropped "for Self Defense" from its name. But those words also meant nutrition, health care and political education for the Black community, said Erika Huggins, who was the first woman to lead a chapter of the Panther Party.

Largely due to its "Survival Programs," the party was embraced in nearly 70 communities across the U.S. and abroad where it had chapters, opened offices, provided free health care clinics to residents and free breakfast programs for schoolchildren, and published Black Panther newspapers. Also among its 65 programs were pioneering sickle cell disease testing research, free food and clothing distribution, transportation service for families visiting incarcerated loved ones, and escorts for seniors who needed assistance getting to a supermarket or a pharmacy.

Panthers were aggressively surveilled by the FBI, and the agency’s infamous and illegal COINTELPRO effort included infiltration and intimidation of Panthers groups across the country. It sowed paranoia, distrust and violence within the party. Whenever the FBI shared intel with police departments, members say, it preceded the assault, torture, arrest, imprisonment and deaths of Panthers across the country.

The narrative continues in places like the Officer Down Memorial Page, a website dedicated to honoring law enforcement officers killed in the line of duty.

Among those memorialized is John Frey, an Oakland police officer who died of gunshot wounds in 1967 after pulling Newton over. Newton denied shooting Frey but was convicted of voluntary manslaughter in 1968. Newton’s conviction was overturned two years later.

"The Black Panthers is a racist, radical group that professed the murders of law enforcement officers," reads the memorial entry for Frey, which also includes claims Panthers were responsible for the deaths of at least 15 officers and the wounding of dozens nationwide.

The party officially folded in 1982 after years of police surveillance, dwindling national membership, violent infighting, allegations of embezzlement and scandals in which Newton was implicated.

In many ways, the old Panthers say, we now live in the Black Panthers’ world. They tilled the ground and made it fertile for activism against police brutality, mass incarceration, generational poverty and racial wealth gaps. For better or worse, they helped launch the America we see today, broken up into tribes by sex and race and creed.

The Panthers were radical for their time, but their positions are less so today, when social activism based on race or ethnicity, religious faith, queer and transgender identity and political ideology is common. And while armed self-defense is still considered extreme, that has not stopped some whites on the far-right from embracing the concept.

The Panthers also pushed society to deal with Black people as they are, not as racists see them. It was a clear contrast to the "respectability politics" of the nonviolent civil rights movement.

That has carried over to the Black Lives Matter movement. Protesters adopted tactical confrontation with law enforcement and elected leaders, in response to the deaths of Black boys, men and women at the hands of police and vigilantes: Trayvon Martin, Eric Garner, Michael Brown, Philando Castile, Breonna Taylor and George Floyd.

The Panthers, he said. are "still a model to draw from."