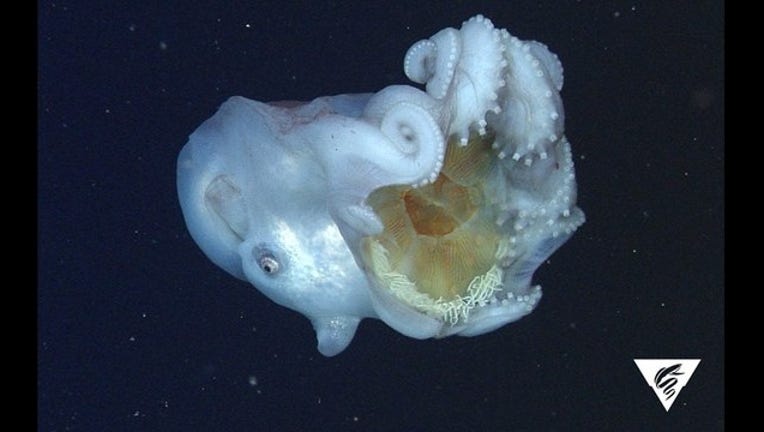 MONTEREY BAY (KTVU) - The Monterey Bay Aquarium Research Institute has made a recent  deep sea discovery about the "dinner" behavior of an elusive octopus.

The Haliphron atlanticus octopus has only been observed three times in the past 27 years.

According to MBARI, researchers have used underwater technology to observe the Haliphron atlanticus octopus.

They watched the Haliphron atlanticus octopus carrying an egg-yolk jelly.

Researchers were surprised to learn the deep sea creature feeds on jellies. According to MBARI, "It is possible that female Haliphron, after eating the preferred nutritious parts, use the bell of the jelly with the stinging tentacles still intact as a tool."

They are able to hold the bell of the jelly while still swimming. Although the jellies are dead at this point, their tentacles continue to sting.

According to MBARI.org, scientists believe, "given the way Haliphron is holding the bell with the fringe of tentacles dragging behind, the octopus could be using the sticky and stinging tentacles either for defense or to capture other more nutritious prey."