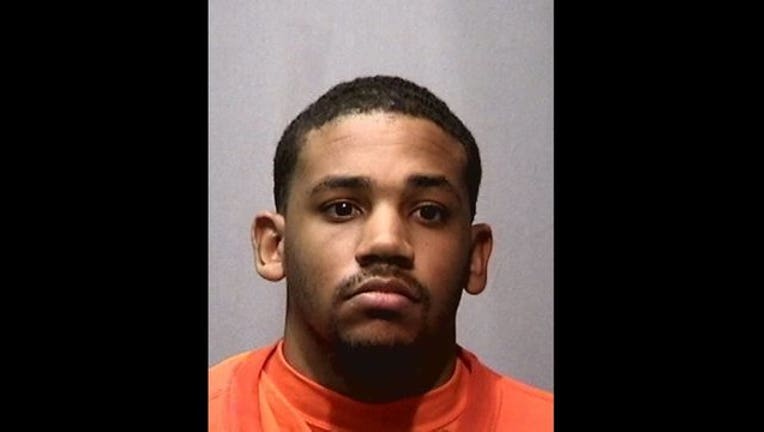 SAN FRANCISCO (BCN)-- Surveillance video of a brutal shooting and stabbing in the San Francisco Gift Center & JewelryMart that left two women dead and a storeowner seriously injured in 2013 drew gasps and quiet sobs from a packed courtroom this morning.

Barry White, 27, sat quietly as surveillance footage was played of the July 12, 2013, attack at Victoga Inc., a store within the JewelryMart complex at 888 Brannan St., in which he allegedly killed Lina Lim, 51, and Khin Min, 35, and shot and stabbed Vic Hung, who survived his injuries.

White, an Antioch resident, is charged with 16 felony counts including first-degree murder and attempted murder. He has entered a not guilty plea, but defense attorneys today did not dispute he committed the
crimes.

Instead, they argued that he suffered a serious brain injury in a 2009 Antioch police shooting that left him with cognitive defects and marked personality changes, including poor impulse control, and therefore should be
found guilty of lesser charges such as manslaughter.

"He carried out a very violent act under extreme perceived provocation because he's suffering from a defect," Deputy Public Defender Kwixuan Maloof said in opening statements.

The JewelryMart killings, in which White was told there were surveillance cameras recording him shortly before he opened fire, were in themselves evidence of his lack of judgment, Maloof said.

Assistant District Attorney Diane Knoles, however, disputed the relevance of the injury from the 2009 shooting, calling it a "scalp wound."

She described the JewelryMart crimes as "cold and calculating" and emphasized the degree to which White prepared himself for them, carrying a gun and knife and even exercising with body weights beforehand.

"Barry White premeditated, he deliberated and he had the intent to kill, and because of that two women are dead and seven others nearly died that day," Knoles said.

White was angry with Hung after learning he had been shortchanged on a $5,573 custom gold chain he had ordered, which weighed 20 grams less than what he had paid for. He demanded a refund, but Hung had refused to pay the full amount he sought.

On the day of the attack, White took a handgun to the South of Market store and waited more than 20 minutes until other customers left before shooting Hung and Lim. He then slashed Min's throat and stabbed Hung
and Lim so viciously that he nearly decapitated Lim, prosecutors said.

"He told the store owner, I will make you pay," Knoles said.

"Ultimately, he made good on his promise."

The attack was captured on multiple surveillance cameras within the store, and audio of the screams and gunshots was also captured by a camera across the hall.

Confronted by police officers responding to the scene as he left the building, White then fled into a taqueria and fired at the officers before running out of bullets and surrendering. Investigators during a
subsequent search of his vehicle found an AK-47 rifle inside.

White filed a federal civil rights lawsuit in 2011 that is still pending in connection with the 2009 shooting.

Antioch police said White was shot after he allegedly brought guns to a party and then rammed a patrol car in Antioch, prompting an officer to open fire.

The lawsuit alleges that Officer Nicholas Cuevas fired at White and two other men while they had their backs turned and their hands up in their vehicle, and that the men did not know he was a police officer.

Police then left White, who was struck with .40-caliber bullets in the shoulder and back of the head, unattended for 90 minutes before providing medical aid, according to the complaint.

The lawsuit also alleges that the family was told by police that no charges would be filed if they did not pursue a complaint. The family filed a complaint in February 2010, and White was charged with assault with a
deadly weapon and resisting arrest in connection with the incident in May 2010.