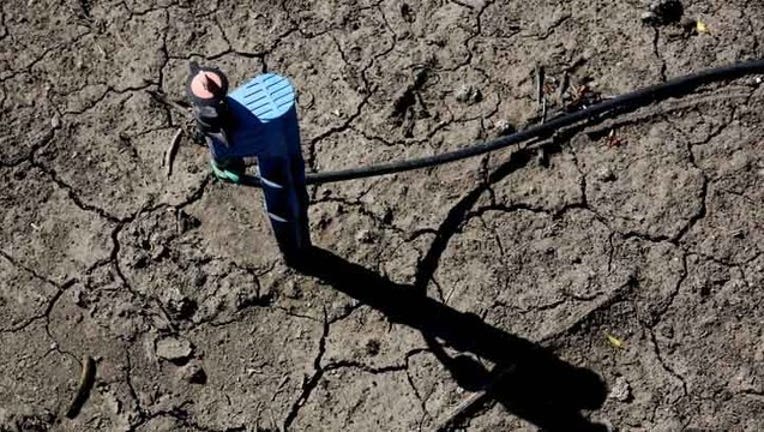 FRESNO, Calif. (AP) — As California struggles with a devastating drought, huge amounts of water are mysteriously vanishing from the Sacramento-San Joaquin Delta — and the prime suspects are farmers whose families have tilled fertile soil there for generations.

A state investigation was launched following complaints from two large agencies that supply water to arid farmland in the Central Valley and to millions of residents as far south as San Diego.

Delta farmers don't deny using as much water as they need. But they say they're not stealing it because their history of living at the water's edge gives them that right. Still, they have been asked to report how much water they're pumping and to prove their legal rights to it.

At issue is California's century-old water rights system that has been based on self-reporting and little oversight, historically giving senior water rights holders the ability to use as much water as they need, even in drought. Gov. Jerry Brown has said that if drought continues this system built into California's legal framework will probably need to be examined.

Delta farmer Rudy Mussi says he has senior water rights, putting him in line ahead of those with lower ranking, or junior, water rights.

"If there's surplus water, hey, I don't mind sharing it," Mussi said. "I don't want anybody with junior water rights leapfrogging my senior water rights just because they have more money and more political clout."

The fight pitting farmer against farmer is playing out in the Delta, the hub of the state's water system. With no indication of the drought easing, heightened attention is being placed on dwindling water throughout the state, which produces nearly half of the fruits, nuts and vegetables grown in the U.S.

A large inland estuary east of San Francisco, the Delta is fed by rivers of freshwater flowing down from the Sierra Nevada and northern mountain ranges. Located at sea level, it consists of large tracts of farmland separated by rivers that are subject to tidal ebbs and flows.

Most of the freshwater washes out to the Pacific Ocean through the San Francisco Bay. Some is pumped — or diverted — by Delta farmers to irrigate their crops, and some is sent south though canals to Central Valley farmers and to 25 million people statewide.

The drought now in its fourth year has put Delta water under close scrutiny. Twice last year state officials feared salty bay water was backing up into the Delta, threatening water quality. There was not enough fresh water to keep out saltwater.

In June, the state released water stored for farmers and communities from Lake Oroville to combat the saltwater intrusion.

Nancy Vogel, a spokeswoman for the state Department of Water Resources, said "thousands of acre-feet of water a day for a couple of weeks" were released into the Delta. An acre-foot is roughly enough water to supply a household of four for a year.

The fact that the state had to resort to using so much from storage raised questions about where the water was going. That in turn prompted a joint letter by the Department of Water Resources and U.S. Bureau of Reclamation calling for an investigation into how much water Delta farmers are taking — and whether the amount exceeds their rights to it.

"We don't know if there were illegal diversions going on at this time," said Vogel, leaving it up to officials at the State Water Resources Control Board to determine. "Right now, a large information gap exists."

Some 450 farmers who hold 1,061 water rights in the Delta and the Sacramento and San Joaquin river watersheds were told to report their water diversions, and Katherine Mrowka, state water board enforcement manager, said a vast majority responded.

State officials are sorting through the information that will help them determine whether any are exceeding their water rights and who should be subject to restrictions.

"In this drought period, water accounting is more important to ensure that the water is being used for its intended purpose," said U.S. Bureau of Reclamation spokesman Louis Moore.

Mussi, a second-generation Delta farmer whose family grows tomatoes, wheat, corn, grapes and almonds on 4,500 acres west of Stockton, said Central Valley farmers have long known that in dry years they would get little or no water from state and federal water projects and would need to rely heavily on groundwater.

"All of a sudden they're trying to turn their water into a permanent system and ours temporary," Mussi said. "It's just not going to work."

"I don't like to pick on other farmers, even if it wasn't a drought year," said Coburn. "The only difference is I don't have a pipe in the Delta I can suck willy-nilly whenever I want."