WASHINGTON (AP) - The Democratic National Committee is delaying its presidential nominating convention until the week of Aug. 17 after prospective nominee Joe Biden said he didn't think it would be possible to hold a normal convention in mid-July because of the coronavirus pandemic.

“In our current climate of uncertainty, we believe the smartest approach is to take additional time to monitor how this situation unfolds so we can best position our party for a safe and successful convention,” Solmonese said.

Biden on Wednesday night told NBC late-night commedian Jimmy Fallon that he doubted "whether the Democratic convention is going to be able to be held” on its original July 13-16 schedule in Milwaukee.

Those comments are the furthest Biden had gone in predicting a delay for the convention, which would mark the start of the general election campaign. The coronavirus pandemic is forcing Democrats and Republicans to take a close look at whether they'll be able to move forward as planned with their summer conventions. Republicans plan to gather Aug. 24-27 in Charlotte, North Carolina.

RELATED: Notable celebrities, leaders and figures who have been diagnosed with the novel coronavirus

In an interview earlier this week with MSNBC, Biden said it’s “hard to envision” a normal convention on that schedule. But the former vice president also noted on “The 11th Hour with Brian Williams” that Democrats “have more time” to figure things out as party officials consider contingencies that could range from an outright delay to making parts of the proceedings virtual so that not as many people attend.

“We were able to do it in the middle of a Civil War all the way through to World War II, have Democratic and Republican conventions and primaries and elections and still have public safety,” Biden said on MSNBC. “We’re able to do both.”

Republicans, meanwhile, are expressing confidence they can pull off their convention as scheduled, but party Chairwoman Ronna McDaniel still allows for the possibility that the pandemic could upend GOP plans.

Neither Democratic nor Republican leaders want to sacrifice the boost that can result from an enthusiastic convention gathering. President Donald Trump thrives on big rallies and has obviously missed that part of his routine amid the coronavirus outbreak, reluctantly turning the Rose Garden and the White House briefing room into substitutes. A traditional convention, with a nationally televised nomination acceptance speech, could be even more critical for Biden, who has been relegated recently to remote television interviews from his Delaware home, unable to draw the kind of spotlight that a sitting president commands.

The Democratic National Committee is delaying its presidential nominating convention until the week of Aug. 17.

RELATED: Coronavirus stimulus FAQ: Who gets stimulus money? Will paper checks be issued? When will it come?

Democratic National Committee authorities based in Milwaukee are exploring various options should social distancing recommendations still be in effect in the summer months. Convention CEO Joe Solmonese hasn’t publicly detailed any specifics, promising only that “we will balance protecting the health and well-being of convention attendees and our host city with our responsibility to deliver this historic and critical occasion.”

Democrats originally scheduled their convention ahead of the Summer Olympics. But the international games have been postponed until 2021, opening several weeks on the summer television calendar if they could logistically manage a delay. Tradition dictates that Democrats, as the party out of power, hold their convention first.

Solmonese and his aides are expected in the coming weeks to present party Chairman Tom Perez with options. But Democrats’ lingering nominating contest could complicate what happens next. Biden holds a prohibitive delegate lead that makes him the prospective nominee, but Vermont Sen. Bernie Sanders remains in the race and insists he has a “narrow” path to the nomination.

With many states pushing back their primaries, Sanders potentially could block Biden from accruing the required delegate majority until late June, just weeks before the current convention dates.

In a typical election, a convention effectively belongs to the nominee, so Perez would be reluctant to make substantial changes to the model without the candidate’s approval. But he’s also cognizant of Sanders supporters who still distrust DNC leadership after the bitter 2016 nominating fight that Sanders lost to Hillary Clinton. 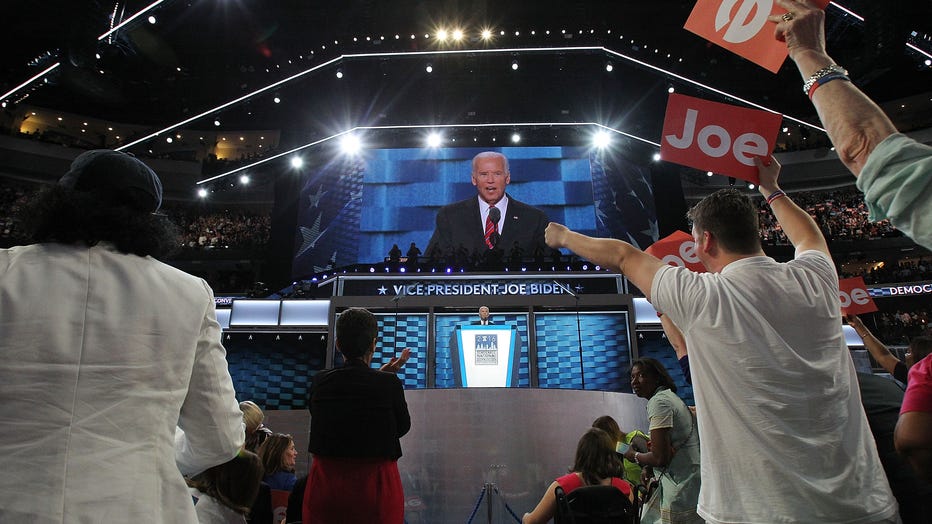 The bottom line, Biden said, is that “we should listen to the scientists” and that the 2020 election, from conventions to voting methods, “may have to be different.”

RELATED: How will we vote? Outbreak revives debate on mail-in ballots

McDaniel, the RNC chairwoman, said she thinks “we should be out of this” by the end of August. In an interview, she said Republicans already have raised the money necessary for the convention and have the staff hired and in place.

“We’re ready to go,” she said. “This isn’t something that’s going to stop us.”

Still, she added a caveat: “Obviously, science will dictate that.”

Other aspects of the presidential campaign, meanwhile, continue unabated by the pandemic.

America First Action PAC, a Republican super political action committee backing Trump’s reelection, announced a $10 million ad buy that will start in mid-April and continue throughout May in Michigan, Wisconsin and Pennsylvania. The digital, television and direct mail investment is the PAC’s first spending against Biden, and it comes in key markets in the three states that provided Trump with his Electoral College margin in 2016.