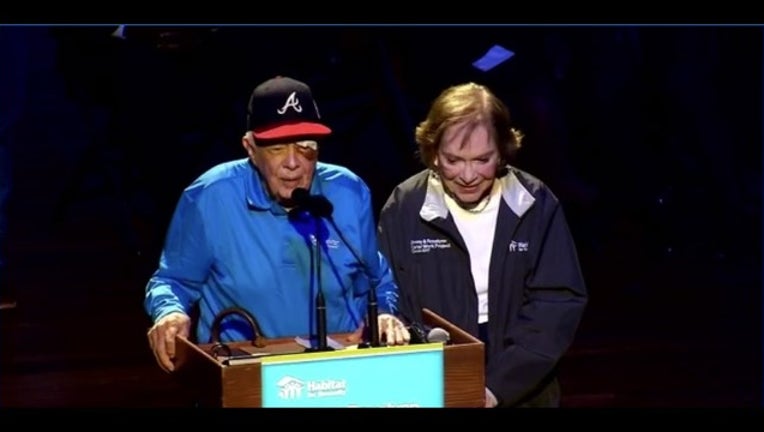 Hours after a fall that led to 14 stitches and a black eye, former President Jimmy Carter addresses a crowd for a Habitat for Humanities event in Nashville, Tenn. on Oct. 6, 2019.

NASHVILLE, Tenn. (AP, KTVU) - With a bandage above his left eye and a large, red welt below it, former President Jimmy Carter was greeted by a cheering crowd Monday morning as he prepared to help build a home with Habitat for Humanity in Nashville.

Carter fell at home on Sunday, requiring 14 stitches, but he did not let his injuries keep him from participating in his 36th building project with the nonprofit Christian housing organization.

Just hours after his fall, Carter made an appearance at an event Habitat for Humanity. He walked on stage with his wife Rosalynn by his side.

The former president told an audience about his accident and emphasized that he wasn't going to let it stop him from taking care of the work he came to do.

"We come in Nashville and I fell down and hit my forehead on a sharp edge and I had to go to the hospital, and they took 14 stitches in my forehead and my eyes black as your nose," he said, and then added, "But I had a number one priority and that was to come to Nashville to build houses."

On Monday morning, Carter followed through and showed up to the construction site to work. He kicked off the building project by lead a morning devotion for a group of several hundred volunteers.

He walked slowly across the uneven, muddy ground to the stage helped by a cane and several people who were nearby to steady him. Once seated, Carter, who still teaches Sunday school twice a week at Maranatha Baptist Church in Plains, Georgia, spoke in a clear voice, peppering his inspirational message with jokes.

He spoke about Jesus' brother James who taught that "if your life is not filled with peace, joy and thanksgiving, it's your fault.'"

Carter said God gives us life and freedom. "With our freedom, every one of us can make a basic decision. ... 'What kind of person do I, myself, choose to be?'"

Carter said every person "can be a complete success in the eyes of God."

Speaking about what makes a successful life, Carter reminded the crowd that Jesus was poor, and died young, abandoned by his closest friends.

"But Jesus lived a perfect life because he followed the will of God," Carter said.

His wife was again by his side at the building site on Monday, along with husband and wife country music stars Garth Brooks and Trisha Yearwood; and Tennessee Gov. Bill Lee and First Lady Maria Lee.

Musician Eric Paslay played a song before Carter took the stage and joked about Carter's injury as he introduced him.

"After that bar fight, you coming out, building houses ... I love you to death," Paslay said.