SANTA ROSA, Calif. - The Sonoma County Sheriff's Office on Wednesday announced detectives had solved a 25-year-old cold case of a Union City woman who was found dead on the side of the road.

Her body was found by a survey crew working in the area of Stony Point Road, north of West Railroad Avenue in unincorporated Sonoma County, a quarter-century ago.

The autopsy showed she had suffered multiple skull fractures and a broken neck.

Valencia said that detectives conducted an "extensive investigation" at the time but came up cold. He added that Bokin's name had come up by FBI agents at the time, but no evidence could link him to her death, Valencia said. 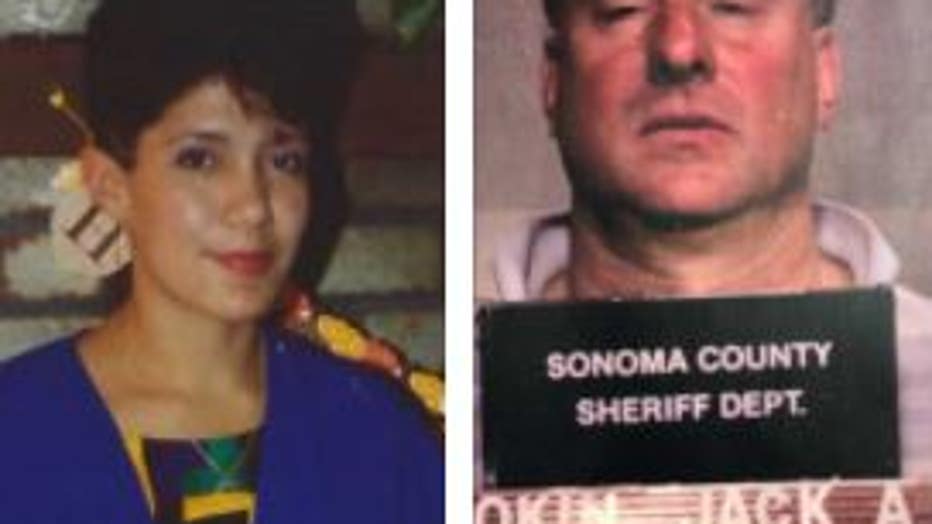 Authorities said that Bokin had picked up Veal in San Francisco that night and later took her to the North Bay. His DNA was found on her, authorities said.

And in April 2021, detectives resubmitted evidence for review to the Serological Research Institute for biological testing.

A DNA match came back to Bokin, who had died on Dec. 4, 2021, where he had been in custody at the California Department of Corrections Medical Facility in Vacaville.

"There's a lot of mixed emotions with the family and obviously our investigations unit," Valencia said. "Obviously it doesn't bring her mom back or her daughter back, but now there's some closure."

Bokin had been arrested in October 1997 – less than a year after Veal was killed – by San Francisco police on a charge of kidnappings with the intent to commit rape and two counts of oral copulation of a person under 14 years of age, false imprisonment and attempted murder.

And in 2000, Bokin was sentenced to serve 231 years in that case - days after trying to escape from the Hall of Justice after he used a makeshift key to unlock his shackles. He dashed from a holding cell with deputies - and even Judge James Warren in pursuit - and was caught.

"I'm not surprised. He was a very scary dude," said Elliot Beckelman, the San Francisco who handled the earlier case. "He's such a candidate for this type of crime. He's a violent guy - he was a violent guy - and he took a lot of risks, and he had this, ‘I don’t really give a damn' attitude."

Veal was a mother of three daughters.

In a statement, Veal's family said in part, "Though she has been gone, memories of her beautiful smile, impeccable style, generous spirit, and enthusiasm for life live on forever in the hearts of the many people whose lives she touched.

"Our dear Michelle was a mom to three young girls who were raised in the care of her incredible mother, as well as by her loving sister. Though her struggles made her particularly vulnerable at times, Michelle’s strength is what kept her persevering through many adversities, to do her best for those she loved. Michelle’s tenacious spirit lives on in her daughters, who are all leading happy, healthy lives today, and raising their children to remember her as the beautiful grandmother whom we all wish they could have met."

An article by Lora Lusher in Crime Magazine described Bokin as her cousin and she chronicled the court case of a 19-year-old prostitute that he had tried to kill by bashing in her head and dumping her into the San Francisco Bay.

She described her cousin as a brilliant boy who grew up in a working-class family in the Mission in San Francisco, but he had "dirty secrets," like sneaking his father's gun to school at age 7. By the time he was 9 he was stealing bikes. And when he was 10, he started molesting her, when she was just 3 years old.

"Even at that young age Jack was already so practiced in stealth that the abuse was never suspected. In the years that followed, not even my father, who was a San Francisco Police Inspector on the Sex Crimes Detail sensed that anything was wrong," Lusher wrote.

In the article, Lusher chronicled a host of other woman that Bokin abused, from a 30-year-old woman at the University of California, Berkeley Extension campus in San Francisco in 1964 to another instance in the 1990s where he picked up a prostitute on Van Ness Avenue in San Francisco and raped and beat her.

She documented in great detail all the harms Bokin had caused women, stating that even though he was family, "he will never, and should never, have another chance at freedom but I find no joy in that, only relief for myself and deep regret that he wasted his life and shattered so many others."