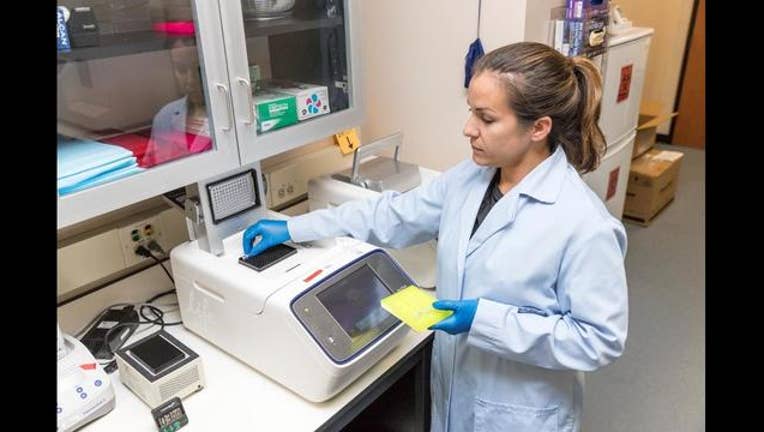 A woman works in a lab in the case of a 33-year-old cold case. Photo: Contra Costa County Sheriff.

DANVILLE, Calif. - Homicide detectives from the Contra Costa County Office Sheriff's on Tuesday announced they had solved a 33-year-old cold case of a Danville woman who had been raped and murdered in her Danville apartment.

In a statement, sheriff's detectives identified Joey Lynn Ford as the man behind the Sept. 20, 1985 murder of 57-year-old Virginia Vincent, whose body was found by a neighbor. The East Bay Times reported that she was found nude with her hands tied behind her. A thin white belt was around her neck and a pair of stockings were next to her. Police at the time said she had been strangled. There was beer and liquor and a partially filled glass on the floor.

DNA and a familial match led investigators to Ford, who died in 1997, at age 36. His body was exhumed from the Fairfield cemetery last month. Specialists got what they needed and the body was placed back in the ground, officials said.

“Because the suspect Joey Ford is deceased, there will be no prosecution in this case,” Contra Costa County Sheriff David Livingston said in a release. “However, we hope that the identification of the suspect in the killing of Virginia Vincent brings her family and the community some closure in this painful case.”

The sheriff said that all investigative leads were pursued at the time, but no suspect was identified and the case went cold for nearly two decades.

In April 2002, a DNA profile was created from the evidence found at the crime scene. No match was found, and once again the case went cold for another 15 years.

Over the years, there have been technological advances in forensic science that have helped law enforcement agencies in analyzing evidence from cold cases. One method is known as “familial search.”

In November 2017, the Sheriff’s Office submitted a request to the California Bureau of Forensic Services  to conduct a familial search using the DNA recovered at the scene.

In June, the sheriff was notified of a possible match, leading detectives to Ford as the likely suspect.

The Sheriff Forensic Services Division Crime Lab confirmed Ford as the suspect after a DNA sample extracted from him matched that found at the crime scene. This is the first successful familial search on a cold case in the Bay Area, Livingston said.

Detectives are still working to determine how the two might be acquainted, but records indicate Ford was arrested for DUI in Danville the day before the killing, just a short distance from the crime scene.

At the time of the homicide, Ford was working as a plumber in the area and Vincent was a real estate agent. Investigators believe this is the likely connection between them, but that remains unclear.

The California Department of Justice Bureau of Forensic Services and Bureau of Investigation and Rick Jackson, a retired long-time Los Angeles Police Department homicide detective, who now lives in the Bay Area, helped solve the case.