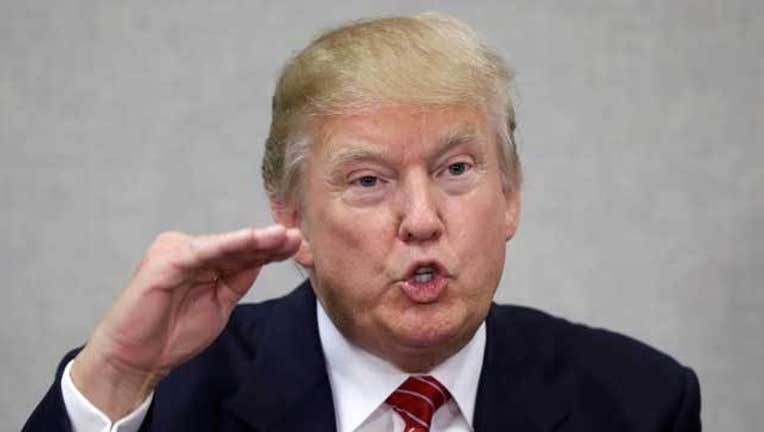 CONCORD, N.H. (AP) — The Republican establishment may hope this is the beginning of the end for Donald Trump's circus-like run for the presidency.

But as the fallout intensifies after the billionaire businessman mocked Sen. John McCain's war hero status, Trump's supporters are more excited than ever about his chances.

"I love to see them jump all over him 'cause they're just giving him a clear road. I love it!" said Trump supporter Frank Candelieri, 89, from Merrimack, N.H., of the backlash his candidate faced in recent days.

Candelieri, a World War II vet who said he won a Purple Heart fighting in the Battle of the Bulge, said he wasn't offended by Trump's comments.

On Saturday, the reality television star dismissed McCain's reputation as a war hero because he was captured in Vietnam, saying he liked "people who weren't captured." McCain, the 2008 GOP presidential nominee, spent more than five years as a prisoner of war, enduring torture and refusing release ahead of fellow captives.

The remark has sparked an avalanche of criticism as veterans groups and many Republican officials defended McCain.

On Monday night, the Des Moines Register, the largest newspaper in early-voting Iowa, published an editorial calling on Trump to drop out of the race under the headline, "Trump should pull the plug on his bloviating side show."

"Trump has proven himself not only unfit to hold office, but unfit to stand on the same stage as his Republican opponents," the paper said.

Trump responded with a statement calling the editorial "sophomoric," and accusing the paper of unfair treatment of his campaign.

The response from different Republican corners highlights discord within the GOP as the party grapples with a massive primary field.

And the intraparty bickering and bitterness is seeming increasingly palpable.

"Don't be a jackass," Sen. Lindsey Graham, one of Trump's GOP presidential rivals, exhorted in an appearance Tuesday on "CBS This Morning."

"Run for president," the South Carolinian said of Trump. "But don't be the world's biggest jackass."

Republican leaders and other 2016 candidates have been frustrated by Trump's brash campaign, which has often overshadowed their own in recent weeks. But many Trump backers in early-voting states argue the exchange is being overblown by the media and his opponents, who fear his sudden rise in early polls. Even many non-Trump supporters doubted the latest controversy would hurt his appeal among a slice of the electorate that is deeply frustrated with the Washington establishment and finds his unvarnished persona refreshing.

"I think it's going to improve his viability to be honest with you," argued Lou Gargiulo, one of Trump's county chairmen in New Hampshire. "The more Mr. Trump is being beaten on by people, obviously the better his polling numbers are."

While McCain may seem to some like an unusual target, the Arizona senator is deeply unpopular among many conservatives. Trump supporters say McCain started the spat by calling several thousand Trump supporters who attended a recent anti-illegal immigration rally in Phoenix "crazies." Trump late Monday softened his tone, albeit slightly, in an interview with Fox News: "Certainly if there was a misunderstanding, I would totally take that back," he said before calling on McCain to apologize to the Arizona voters he insulted.

Republican state Rep. Steve Stepanek, one of the first New Hampshire Republicans to endorse Trump, said he continues to be a strong supporter and echoed Trump's assertion that McCain has not done enough to help veterans or fix the Department of Veterans Affairs.

"He's a very influential person in the Senate and this should have been a top priority of his," Stepanek said.

In Iowa, Chris McAninch, 56 of Grimes, said the McCain comments have not changed his view of Trump as one of his top choices.

"I think he was fully in the right," McAninch said. "I want somebody who is straight shooting and tough for America."

Much of Trump's appeal is based on his brand as a political outsider and say-anything style, and backers acknowledge that what drives his appeal is sometimes going to get him into trouble.

In South Carolina, Teresa Brown of Murrells Inlet said Trump "could have worded it better" when addressing McCain's criticism. But the 24-year-old graphic designer described Trump as an inspirational figure who draws conservatives and disaffected voters eager for a candidate "who tells it like it is," rather than conventional politicians "who are always too worried about offending people."

"He resonates with me — good, bad and ugly," said Gene Ho, another Trump backer from Myrtle Beach, South Carolina, who works as a professional photographer.

Craig Williams, chair of the Carroll County Republicans in western Iowa, said Trump appeared to be gaining traction in the state because of his willingness to be direct.

"I've talked to a lot of people who are pretty happy with things that he's said. He's in a unique position to say what is on his mind," said Williams, who also serves on the Republican Party of Iowa State Central Committee and will remain neutral.

Robert Kiger, who launched a super PAC to support Trump, dismissed the controversy surrounding the comments as out-of-control political correctness.

"People are really, really tired of the establishment, people are tired of professional politicians who make huge promises, go to Washington and then do absolutely nothing," he said.