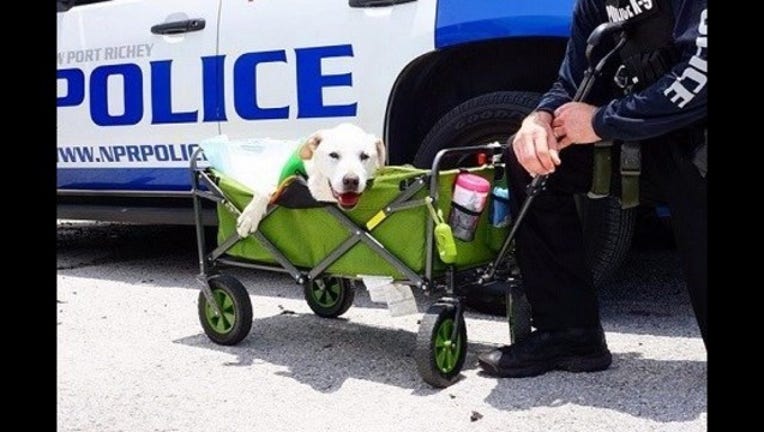 ST. PETERSBURG (FOX 13) - He gets around in a wagon, but Poh the dog is getting to do what many people miss out on -- he's tackling his bucket list.

Owner Thomas Rodriguez is the man behind the mission. When Poh, who is 15 years old, was diagnosed with kidney failure and cancer earlier this year, the two took off, to live Poh's last days to the fullest.

"Having new smells, a new environment  and new stimulation. That's what keeps him going and keeps his spirits up. As opposed to just sitting in a room somewhere and just waiting," Rodriguez said.

It's turned into quite the adventure.

"We've been to Washington, D.C. to all the monuments, to the National Mall. We brought him to the Golden Gate Bridge," Rodriguez smiled.

This week, Poh's getting some sunshine. Something he'd be starved for at home in his New York City apartment.

"Throughout travels we found out Poh loves the beach. We found out there was a really great dog beach down in St. Petersburg," he explained.

Tuesday, he snoozed in the sun at Fort DeSoto. Wednesday, he visited a friend he made at the beach, over at the SPCA.

"I think for him, this has been actually been the best medicine," Rodriguez added.

Thomas knows his buddy's time is running out. Until that day comes, Poh is on the receiving end of what makes dogs man's best friend -- unconditional love.

So what's next for Poh? His owner hopes he gets to meet some dolphins in Florida and then the pair may head to explore the Midwest.