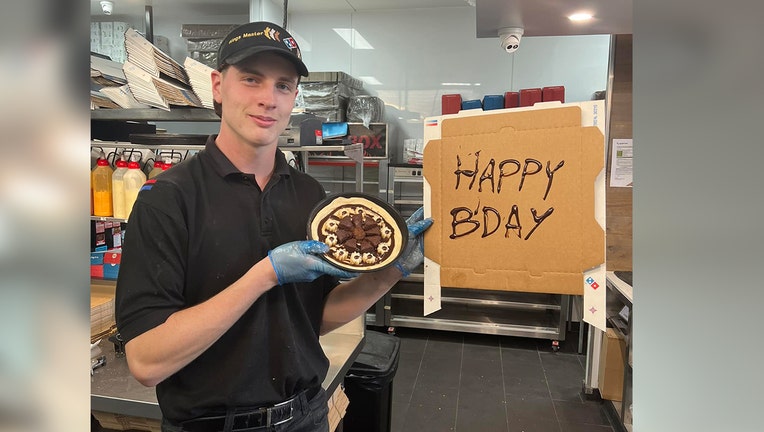 QUEENSLAND, Australia - A Domino’s Pizza worker displayed an act of kindness after a birthday girl’s friends didn’t show up to her party.

The pizza restaurant chain, located in Queensland, Australia, received a call last month from a mother hoping to cancel a large order she had placed, since "a number of her daughter’s peers hadn’t turned up to her birthday party," the pizza franchise shared on social media.

After sharing her story, Miles, the store’s shift supervisor who took the call, decided to surprise her daughter with a special treat that could cheer her up.

"When I first heard that one of our customers wanted to cancel a large pizza order after only one friend turned up to her daughter’s birthday party, I knew I wanted to do something to cheer her up," Miles told FOX Television Stations.

When she arrived at the store to collect her one pizza, Miles surprised her with a custom chocolate dessert pizza topped with churros and brownies.

"I thought about what would have made me happy at that age and immediately decided to make her a surprise Choc Fudge Brownie and Churro pizza – because the only thing maybe better than pizza, is a chocolate one," he continued.

Why avocado prices are dropping while other food prices soar

Miles shared that the gesture "was only something small" but was pleased to know that his team was able to "turn her day around and make her feel special."

Domino’s Australia thanked Miles on social media writing, "Thank you Miles for going the extra ‘mile’ to help turn this customer’s day around."