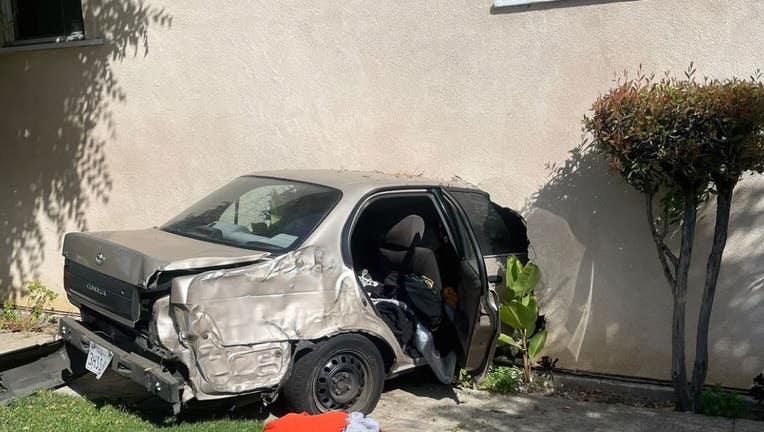 A vehicle crashed into a house on the 2000 block of Alhambra Ave. in Martinez, Calif., also severing a PG&E gas line to the house on June 8, 2022. The driver fled on foot. (Martinez Police Department via Bay City News)

MARTINEZ, Calif. - Police and fire crews responded Wednesday morning after a car slammed into a Martinez home and caused a gas leak.

The car, a gray sedan, veered off the road about 9:10 a.m. and crashed into a home in the 2000 block of Alhambra Avenue, Martinez police said on social media. The driver fled, leaving the vehicle lodged in a side wall of the home.

No injuries were reported, but the collision severed a PG&E gas line to the house and caused a leak, officials said.

When police arrived, they evacuated residents of the home and nearby structures.

Police were searching the area for the driver and the investigation is ongoing.   The gas line was shut off and fire crews, PG&E and city employees are at the scene.

Soto Street between Castro Street and Alhambra Avenue was closed.