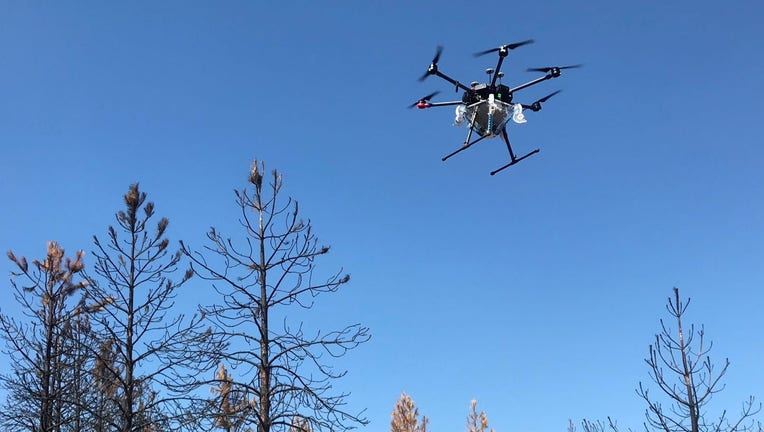 RENO, Nev. - Conservationists on the California-Nevada border are experimenting with a new way to try to revive forests devastated by wildfires: by using drones to rain balls of nutrients, soil and pine seeds over the ravaged landscapes.

Teams working on the project told the Reno Gazette Journal that they hope it will prove to be an easier alternative to replanting by hand in order to replenish steep, remote and hard to reach areas that burn.

The Humboldt-Toiyabe National Forest partnered with the groups Flying Forests, the Desert Research Institute and the Sugar Pine Foundation on the project. Using large drones, they dropped balls of Jeffrey pine seeds, nutrients and soil over 25 acres in the area known as Dog Valley, west of Reno. The area burned in the lighting-caused Loyalton Fire in August, which burned 78 square miles and several structures.

Researchers chose the area because its accessibility will allow them to watch the seedlings develop and determine if the drone drops are effective and should be used elsewhere.

"We have a lot of bare mineral soil to work with, so we can see how the seed balls are dispensed by the drone, how they land on the ground, and also what the success rate is of those seed balls without competing vegetation growing around them," Carson Ranger District Forester Annabelle Monti said.

The 30-plus pounds of seed used in the drop were collected by the nonprofit organization The Sugar Pine Foundation, which used its social media pages to solicit donated seeds.

The seeds were shaped with nutrient-rich soil into 500 to 700 balls, which were loaded into drones.

If the project proves successful, it may be expanded to other parts of the Eastern Sierra, Monti said.