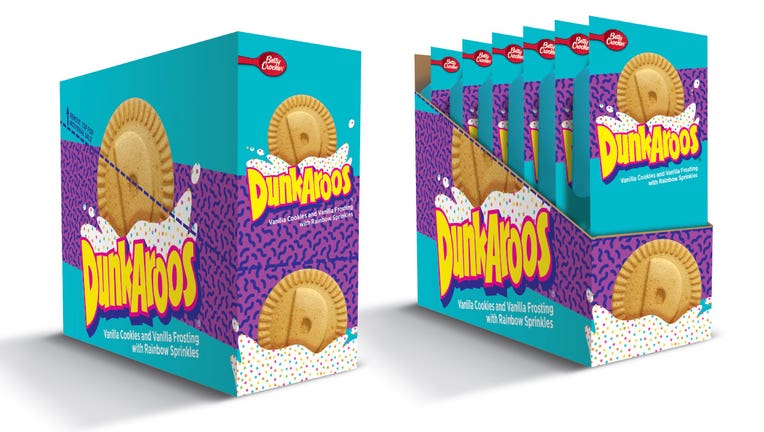 The reimagined box of Dunkaroos that will be available in summer 2020 are shown in a promotional photo. (Photo credit: General Mills)

LOS ANGELES - It’s finally happening, one of the most popular snacks of the 90s – Dunkaroos – will be coming back this summer.

General Mills announced the nostalgia-inducing epic comeback on its “Taste of General Mills” blog on Monday.

“We’re thrilled to relaunch Dunkaroos in the U.S. after years of it only being available in Canada,” said Jeff Caswell, president of snacks at General Mills. “For those who grew up in the 90s, the original cookie-frosting combo represents the taste, color and fun of being a kid during that decade.”

Dunkaroos were first introduced to the masses in 1992 along with the kangaroo mascot Sydney. The snack started off with five different kangaroo-shaped cookies and a choice of chocolate or vanilla frosting.

The cookie-dipping snacks have been available in Canada for some time, but fans in the U.S. will be able to get their sugar fix once Dunkaroos are back this summer.

General Mills said the vanilla cookies and vanilla frosting with rainbow sprinkles will be the relaunched flavor.

An exact date in the summer was not given.