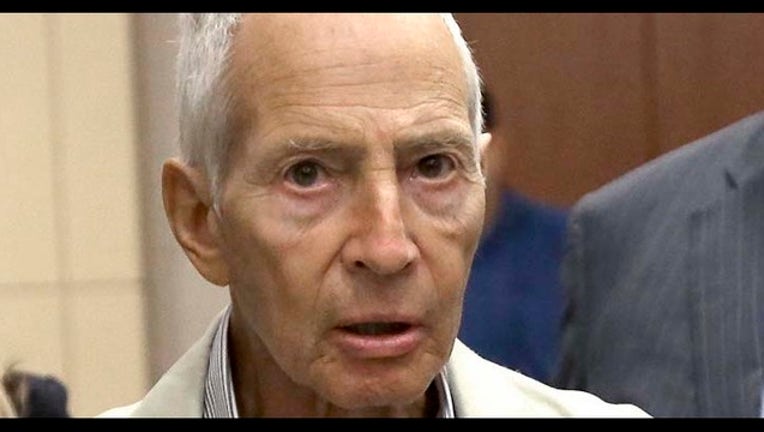 NEW ORLEANS (AP) — Robert Durst couldn't explain away similarities between his handwriting and a letter he said "only the killer could have written" that alerted police to his friend's shooting 15 years ago.

Confronted with new evidence by the makers of a documentary about his links to three killings, the troubled millionaire blinked, burped oddly, pulled his ear and briefly put his head in his hands before denying he was the killer.

Then he stepped away from the tense interview and went to the bathroom, still wearing the live microphone that recorded what he said next.

"There it is. You're caught!" Durst whispered before the sound of running water is heard. "What the hell did I do? Killed them all, of course."

That moment didn't just make for a captivating finale to a six-part documentary on the eccentric life of an heir to a New York real estate fortune.

It also may have given police and prosecutors more evidence in the long-cold case of a mobster's daughter. Susan Berman was felled by a bullet to the back of her head as investigators prepared to find out what she knew about the disappearance of Durst's wife in 1982.

Los Angeles prosecutors filed a first-degree murder charge Monday that alleges Durst lay in wait with a gun and killed a witness — special circumstances that could carry a death sentence if prosecutors decide later to pursue it.

Durst, 71, who was arrested at a New Orleans hotel on the eve of Sunday's final episode, agreed Monday to face trial for the murder of Berman, who had vouched for him in public after his wife vanished.

Attorney Dick DeGuerin said outside court that Durst didn't kill Berman, and is "ready to end all the rumor and speculation and have a trial."

The makers of "The Jinx: The Life and Deaths of Robert Durst" said Durst rejected his lawyer's advice to stay quiet before granting two lengthy interviews. They also said he knew he was being recorded throughout, and that they shared any evidence they gathered with authorities long before broadcasting the film on HBO.

"Any statement that the defendant makes that they want to use against him, they can use against him," said Andrea Roth, a law professor at the University of California, Berkeley. "Even if it's sketchy, and only in context appears to make him look guilty."

Kerry Lawrence, a defense attorney in Westchester County, New York, said Durst's lawyers will have to try to explain away his comments, perhaps dismissing them as a joke.

"Prosecutors would argue it was a candid moment of self-reflection, and he I assume will argue that he knew he was still being recorded, and this was either said in jest or he was being facetious or sarcastic or was being provocative," Lawrence said. "I don't think it's quite the smoking gun."

The bathroom recording was not part of the evidence presented to prosecutors before charges were filed because detectives were still trying to determine if the recording was tampered with in any way, a law enforcement official with knowledge of the investigation told The Associated Press.

The official, who was not authorized to speak publicly because the investigation was ongoing and spoke on condition of anonymity, said the handwriting analysis was the key new evidence in the long investigation.

The documentary showed filmmaker Andrew Jarecki confronting Durst with a copy of an anonymous letter that alerted Beverly Hills police to look for a "cadaver" at Berman's address.

Durst offered that whoever sent it was "taking a big risk. You're sending a letter to police that only the killer could have written."

Then, in the final episode, Jarecki revealed another envelope, which Durst acknowledged mailing to Berman, that has similar writing in block letters and also misspelled the address as "Beverley."

"I wrote this one but I did not write the cadaver one," Durst said. But when shown an enlargement of both copies, Durst couldn't distinguish them.

She believes it was her reopening of the cold case into Kathleen Durst's 1982 disappearance that provoked the killing of Berman, who had been Durst's confidante.

Now, she said, his own words can convict him.

"It was a spontaneous statement, a classical exception to the hearsay rule," Pirro told Fox's "Good Day New York." ''I don't hear it as a muttering. I hear it as a clear, unequivocal 'I killed them.' That means he killed his wife, he killed Susan Berman and he killed Morris Black."

Durst — still worth millions despite his estrangement from his family, whose New York real estate empire is worth about $4 billion — has maintained his innocence in three killings in as many states.

He was acquitted by a Texas jury in the 2001 dismemberment killing of his elderly neighbor, whose body parts were found floating in Galveston Bay. Lawyers said Durst — who fled Texas and was brought back to trial after being caught shoplifting in Pennsylvania — killed Morris Black in self-defense.

Durst, however, acknowledged using a paring knife, two saws and an ax to dismember the body, and that may result in a delay of his transfer to Los Angeles, because he was arrested with a revolver on Saturday. That's illegal for felons, and Durst did prison time after pleading guilty to evidence tampering and jumping bail.

Louisiana authorities filed weapons charges late Monday charging Durst as a convicted felon in possession of a firearm and with having a small amount of marijuana.

When Durst approached the filmmakers and agreed to go on camera, he was still suspected in the killing of Berman, whose father was a Las Vegas mobster associated with Bugsy Siegel and Meyer Lansky, and the disappearance of his wife, who was declared dead long after she vanished in New York in 1982.

Durst's longtime Houston lawyer Chip Lewis called Jarecki "duplicitous" for not making it clear to Durst that he would be sharing footage with police.

"It's all about Hollywood now," Lewis said.

But Jarecki said Durst signed a contract clearly giving the filmmakers the right to use what they gathered however they wished.

Los Angeles Deputy Police Chief Kirk Albanese said the timing of the arrest had nothing to do with the production and that police were concerned Durst might flee the country.

"We do police work based on the facts and evidence," Albanese told the AP on Monday. "I know there's lots of speculation about that. It had nothing to do with the show."

By Monday, the filmmakers — likely witnesses at a trial — said they would make no more comments.