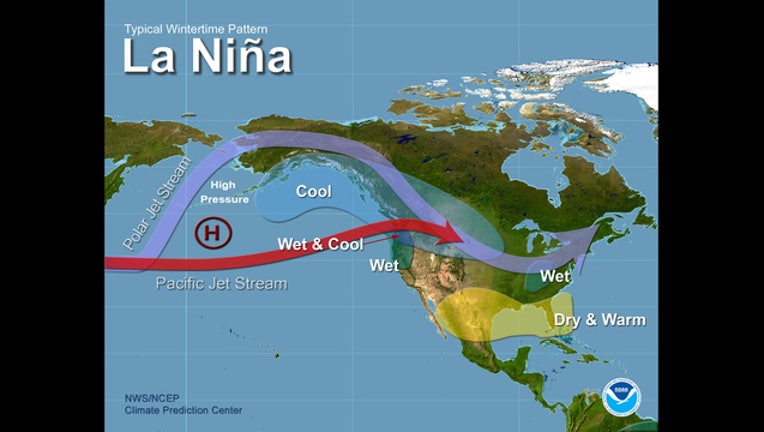 WASHINGTON (AP) — This year's monstrous El Nino, nicknamed Godzilla by NASA, is dead. It heated up the globe, but didn't quite end California's four-year drought.

In its monthly update Thursday, the National Oceanic and Atmospheric Administration said the El Nino has ended, 15 months after its birth in March 2015. El Nino is a natural warming of parts of the central Pacific that changes weather worldwide.

Halpert said this El Nino triggered droughts in parts of Africa and India and played a role in a record hurricane season in the Pacific. It also added to man-made warming, as Earth has had 12 straight record hot months and is likely to have its second straight record hot year.

In parts of the central Pacific, ocean temperatures were even hotter and caused more harm than 1997-98, leaving scars "written in the geography and appearance of global reefs for decades to come," said Georgia Tech climate scientist and coral expert Kim Cobb .

"This El Nino has caused some of the worst coral bleaching and death of any event we've ever seen," said NOAA coral reef watch coordinator Mark Eakin. "We've had enough of this."

Some in California had hoped that the drought would be busted by the El Nino, which generally brings more rain to California and the South. But even at the start, NOAA had cautioned that the rain deficit was too big for the El Nino to fix. And while it was rainy, it wasn't enough, Halpert said.

La Ninas generally bring more hurricanes to the Atlantic instead of the Pacific, but doesn't have much impact on summer temperature or rain in the United States. It often features drier-than-normal conditions in the U.S. Southwest and wetter conditions in the Pacific Northwest.

In the winter, La Nina often brings lots of rain to parts of Australia and Indonesia and cooler temperatures in parts of Africa, Asia, South America and Canada.

Cobb said her work has found some evidence, not enough to be conclusive, that man-made global warming is causing bigger El Ninos more often.

Global temperatures with the El Nino that just ended have been about 0.8 degrees warmer (0.45 degrees Celsius) than the 1998 El Nino, according to NOAA.

"This has been a bellwether event," Cobb said.

Follow Seth Borenstein at http://twitter.com/borenbears and his work can be found at http://bigstory.ap.org/content/seth-borenstein