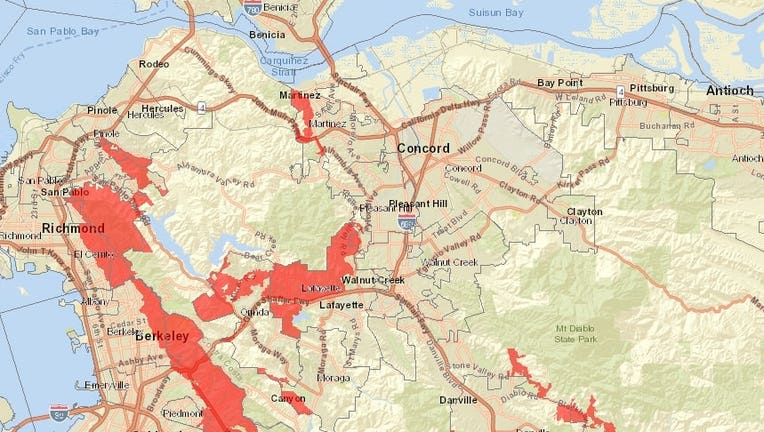 BERKELEY, Calif. - At least two East Bay jurisdictions are suggesting Sunday that residents in the highest risk areas consider evacuating voluntarily ahead of the high winds that have prompted a red flag warning for much of the Bay Area.

"While we have had many Red Flag Warnings this year, this event poses a greater threat. Hills residents should consider leaving before Sunday afternoon," the City of Berkeley advised on social media.

The city noted that several hotels in town are offering discount rates for those who choose to leave.

"We have activated our Emergency Operations Center and increased fire resources and police patrols in the hills," the city said.

Fallen trees in Berkeley should be reported to 311.

"A Fire/Forestry task force will be ready to rapidly respond to downed trees blocking evacuation routes," the city said.

The Contra Costa Fire Protection District offered similar advice in a notice it circulated Sunday afternoon, saying, "County residents in areas susceptible to wildland fire may want to consider relocating ahead of this event."

The fire district advised that residents in living in areas considered very high fire hazard severity zones, in wildland-urban interface areas, or in areas with narrow streets or limited evacuation routes should be sure cell phones are fully charged and notifications are enabled; cars are parked facing out of driveways; alternate evacuation routes from home to a safe area are identified; and a plan is in place and people are ready to go as soon an official evacuation order is received.

Gusts of 40 to 60 mph are likely in some areas and in some peaks gusts may exceed 70 mph. Even 100 mph gusts are not out of the question.

The National Weather Service has warned that the peak period of concern will start about 6 p.m. Sunday through 7 to 10 a.m. Monday, "when winds will be strongest."

Coupled with the red flag warning are power shutoffs planned by PG&E for some 400,000 customers in Northern and Central California to reduce risk of equipment sparking a wildfire.