DANVILLE, Calif. - The East Bay owner of a nail salon is upset with Governor Gavin Newsom after he "called out" the nail industry for having the first community spread of coronavirus in California.

Phung said she's been in the business for three decades and that the industry is strictly regulated by the Board of Cosmetology.

With COVID-19, she said she and other salon owners are taking extra precautions.

On Friday afternoon, a KTVU crew spotted customer after customer stopping by to see when Phung's salon would reopen.

Their anticipation is shared by Phung, who says, "we are so ready and excited to open and serve our community."

The lifting of state and local restrictions is likely weeks away, but she's prepared.

"All the instruments we use are all sanitized and disinfected," said Phung,

She added that she will be implementing new procedures to protect against COVID-19, including appointments only, limiting the number of people in the salon, temperature checks, gloves and masks.

Phung has moveable curtain partitions that will be used for six feet of social distancing.

New plexiglass dividers have been installed on tabletops to protect customers and employees.

She said they will be cleaned and sanitized after each use.

Phung said she was upset to hear Newsom say the state's first known case of communal spread was at a nail salon.

She said it caused confusion and fear of racism against Asians.

Phung said the industry is highly regulated and staffed by trained workers. "We strictly abide by all the rules so that's why it was troublesome and harmful in our industry to hear that coming from him," Phung said.

Newsom addressed the concern over his remark during his Friday briefing.

"It was a factual statement. It was not a statement to be extrapulated as an indictment, quite the contrary of an industry I deeply respect."

— Governor Gavin Newsom, during a Friday media briefing on COVID-19.

Jennifer Banmiller is a regular patron of Phung's nail salon. She said it's understandable that some people would be hesitant to visit nail salons but urges them to take note of their sanitary practices.

"We all need to be smart of social distancing but we can't buy into the fear," said Banmiller.

Phung said more than 80% of the nail salons in California are owned by Vietnamese people.

"These are hardworking individuals who rely on all of their hard work, sweat and tears and labor just to provide for their families," said Phung. 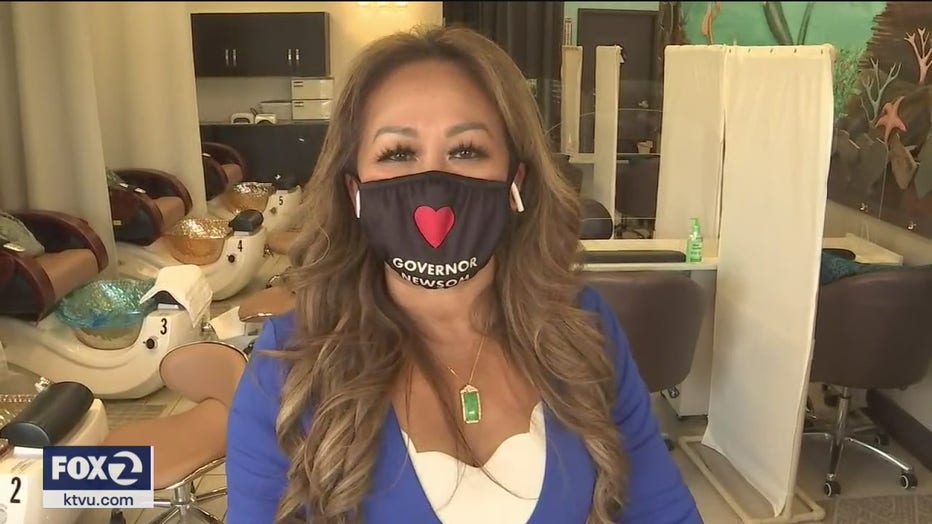 Phung said she had been wearing a face mask-one with a heart and "Governor Newsom" written on it.

Now, she said it may be more appropriate to wear her alternate mask with the message: "We are all in this together."

Phung said she's speaking out to educate the public.