Gov. Gavin Newsom was in Long Beach Wednesday giving an update on the state's vaccine supply.

LONG BEACH, Calif. - California continues to make progress in their vaccination effort, now with a heavy emphasis on educators.

According to Long Beach Mayor Robert Garcia, Long Beach was the first university in the Cal State system to start vaccinating teachers, faculty and staff. 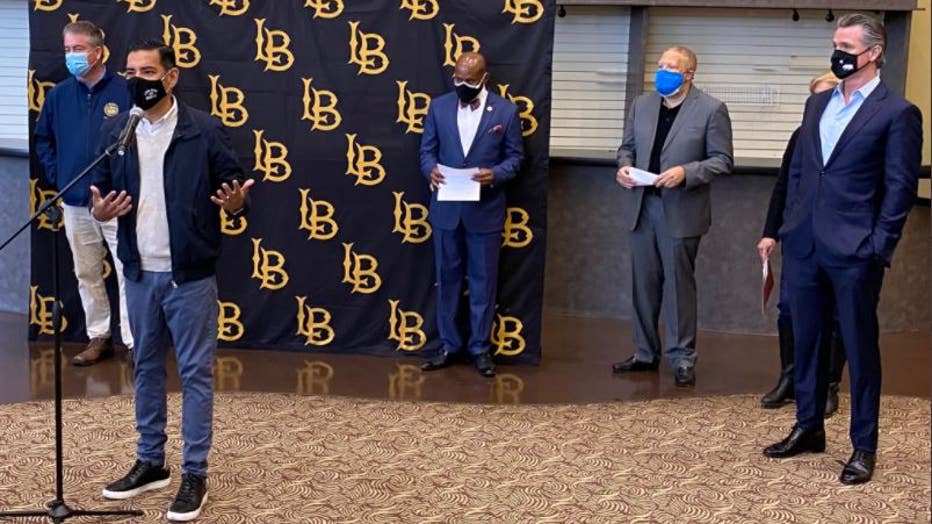 During a press briefing with the governor, Garcia said in just a week all faculty and staff at the university will be completely vaccinated. Long Beach is significantly ahead of the state when it comes to vaccinations.

Currently the state is focusing on vaccinating all educators in hopes to get students back in the classroom as soon as possible.

Gov. Newsom said starting this week the state will set aside 75,000 doses for educators.

RELATED: Agreement reached to get California children back in classrooms

"No other state comes close, no other nation comes close. There are just six others in the world that have administered as many vaccines," Newsom stated Wednesday.

The governor stated that this week the state will receive 21,000 doses of the new Johnson & Johnson single dose vaccine. He said 10,500 doses will be sent to LA and another 10,500 will be sent to Alameda County, again both at the FEMA vaccination sites.

According to Long Beach Mayor Robert Garcia, Long Beach was the first university in the Cal State system to start vaccinating teachers, faculty and staff.

By next week the state should see 320,000 doses of the Johnson & Johnson vaccine.

Newsom says even though the state is making great progress the only restraint is from manufacture supply.

Last week the state received 1.73 million vaccines while this week only 1.58 were received.

"We are making progress but it’s not mission accomplish," he stated. Newsom noted that the positivity rate in the state has dropped to 2.2%, noting there are "only a few states in America with lower positivity rates than California.''

While in Long Beach, Newsom said the state has confirmed the first case of a COVID-19 variant that was first discovered in New York. He says the case was found in Southern California, but he didn't specify the location. Like other variants, the New York variant is believed to be more easily transmitted from person to person, and federal officials say it could potentially be more resistant to vaccines.