The remains of 22 of its ancient royals traveled on April 3 from central Cairo to a new museum further south of the capital.

CAIRO (AP) - Egypt held a gala parade on Saturday celebrating the transport of 22 of its prized royal mummies from central Cairo to their new resting place in a massive new museum further south in the capital.

The ceremony, designed to showcase the country’s rich heritage, snaked along the Nile corniche from the Egyptian Museum overlooking Tahrir Square, to the newly opened National Museum of Egyptian Civilization in the Fustat neighborhood, where Egypt’s first Islamic capital was located.

The mummies were being transported in climate-controlled cases loaded onto trucks decorated with wings and pharaonic design for the hour-long journey from their previous home in the older, Egyptian Museum. Those vehicles were designed to appear like the ancient boats used to carry deceased pharaohs to their tombs.

The remains of 22 of its ancient royals traveled on April 3 from central Cairo to a new museum further south of the capital. (Credit: Salma Khattab via Storyful)

Most of the mummies belong to the ancient New Kingdom, which ruled Egypt between 1539 B.C. to 1075 B.C., according to the ministry of antiquities.

They include Ramses II, one of the country’s most famous pharaohs, and Queen Hatshepsut, Egypt’s only woman Pharaoh — who wore a false beard to overcome tradition requiring women to play only secondary roles in the royal hierarchy. 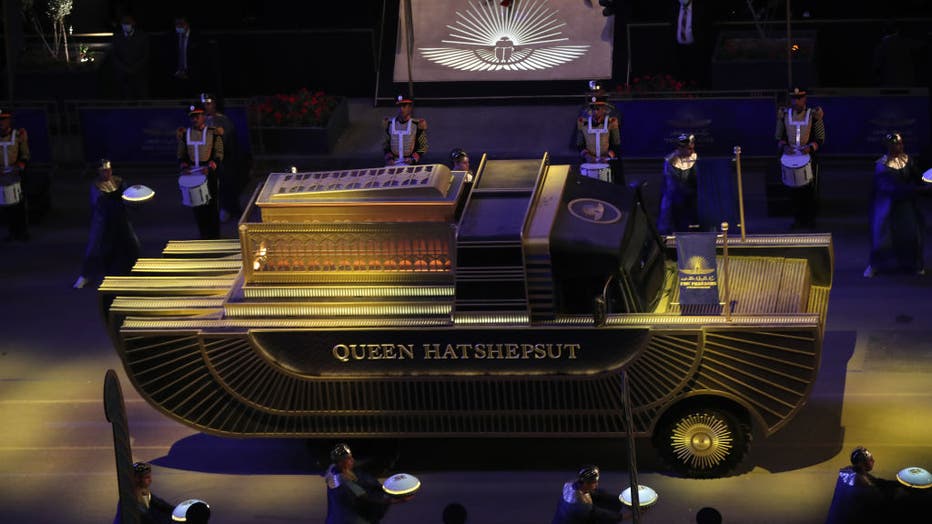 A carriage carrying the mummy of ancient Egyptian Queen Hatshepsut rolls out of the Egyptian Museum near Cairo's Tahrir Square during the "Pharaohs' Golden Parade." (Photo by Gehad Hamdy/picture alliance via Getty Images)

The mummies — 18 pharaohs and four other royals — were originally buried around 3,000 years ago in secret tombs in the Valley of Kings and the nearby Deir el-Bahri site. Both areas are near the southern city of Luxor. The tombs were first excavated in the 19th century.

After excavation, the mummies were taken to Cairo by boats that sailed the Nile. Some were showcased in glass cases, while others were stored. The remains of Ramses II were taken to Paris in 1976 for intensive restoration work by French scientists.

The made-for-TV parade was part of Egypt's efforts to attract foreign tourists by publicizing its ancient artifacts. The tourism industry has been reeling from political turmoil following the 2011 popular uprising that toppled longtime autocrat Hosni Mubarak, and more recently, the coronavirus pandemic.

"This parade is a unique global event that will not be repeated," declared Tourism and Antiquities Minister Khaled el-Anany.

Security is tight in the capital, with authorities closing off major streets and intersections all along the route for the slow-moving vehicles. Guards on horses and Egyptian celebrities and signers followed the motorcade. 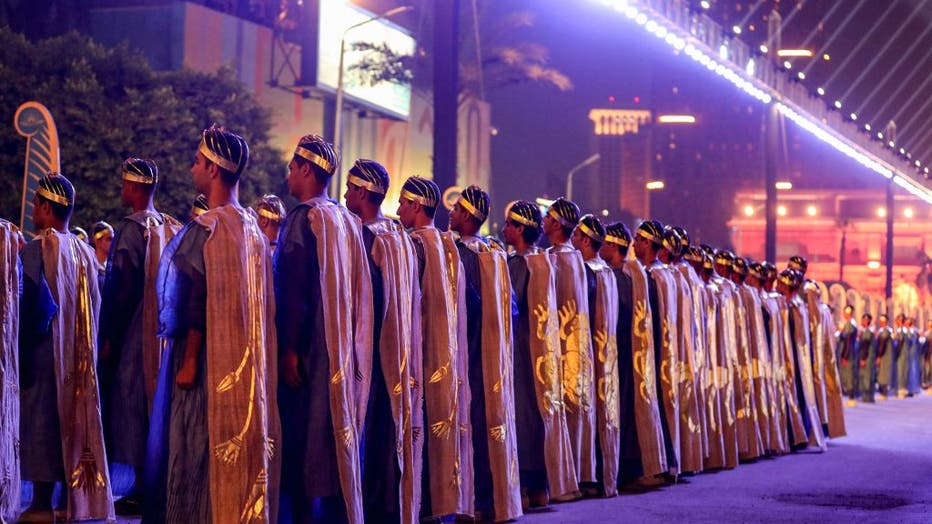 Performers dressed in ancient Egyptian costume wait at the start of the parade of 22 ancient Egyptian royal mummies departing from the Egyptian Museum in Cairo's Tahrir Square on April 3, 2021, on their way to their new resting place at the new Natio

The event started in the late afternoon and was broadcast live on the country’s state-run television and other satellite stations. The Tourism and Antiquities Ministry also live-streamed it on social media platforms. 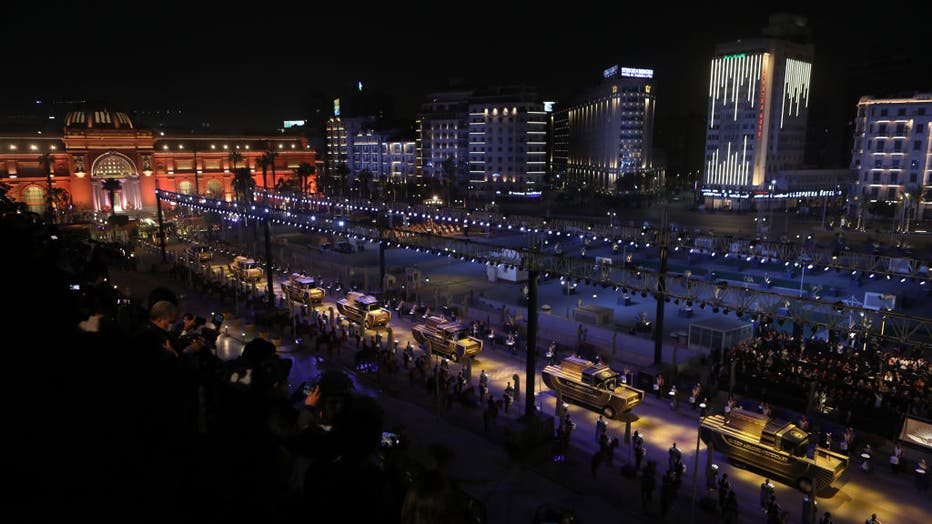 Egypt’s President Abdel Fattah el-Sissi, who will welcome the mummies at the new museum, tweeted: "This majestic scene is a new evidence of the greatness of this people, the guarding of this unique civilization that extends into the depths of history."

Once at the new museum, 20 of the mummies will be displayed, while the remaining two will be stored, according to the ministry.