The motor vessel NYK Delphinus contacted Coast Guard Sector San Francisco watchstanders at 4:54 a.m., reporting an engine fire aboard the ship approximately 50 miles west of Monterey, Calif., May 14, 2021. A Unified Command consisting of the Coast Guard, the State of California, and Resolve Marine are responding to the fire. (Coast Guard courtesy video)

MONTEREY COUNTY, Calif. - A fire on a container ship off the Monterey coast has been contained, smoke is no longer visible, and the temperature has been falling in the NYK Delphinus's engine room, where the fire originated, according to a report from the U.S. Coast Guard.

The next step for the combined rescue crew from the state of California, the Coast Guard and the maritime salvage and emergency response company Resolve Marine is to determine whether the ship can withstand being towed to Oakland, the Coast Guard said at midday on Saturday.

Sea conditions were slowing the firefighting and rescue operation, according to the Coast Guard.

Authorities across the Bay Area issued wind advisories and fog warnings on Saturday.

The NYK Delphinus is about 322 yards long and 35 yards wide, according to the website marinetraffic.com. That's longer than two football fields set end to end but a little narrower. 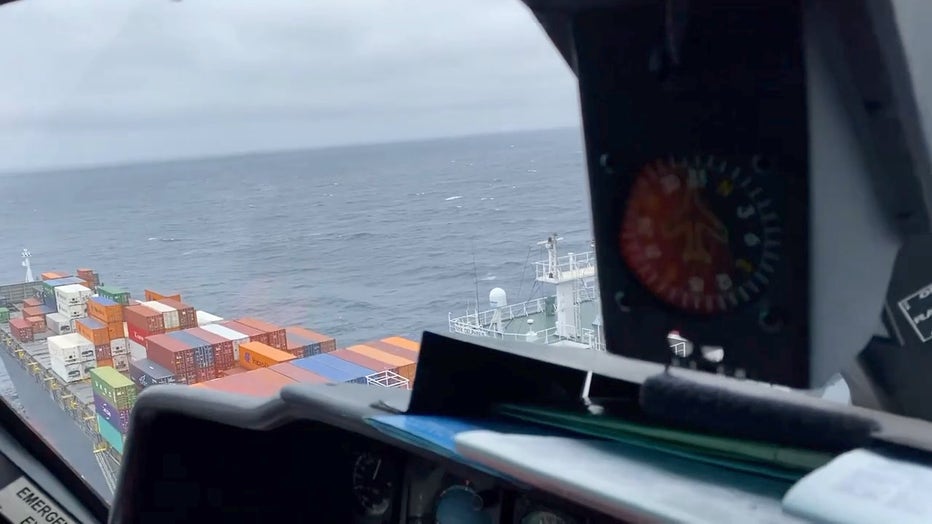 It was built in 2007 and can carry 4,888 20-foot shipping containers, according to marinetraffic.com.

Based in Liberia, the ship had left the Fraser River in Canada on May 7, according to marinetraffic.com. The website and the Coast Guard both reported the ship was bound for Oakland; it had passed San Francisco Bay and was heading north again when the fire began.

All 24 crew of the container ship have been accounted for, and no injuries or pollution resulting from the blaze have been reported, the Coast Guard said.

Crew members on the ship first reported the fire just before 5 a.m. Friday. Resolve Marine contracted with four tugboats that helped extinguish the fire, and a fifth with additional capabilities was on its way Saturday.

No other details about the fire or the ship or its cargo have been released.