Results of a 20-year study found evidence that multiple sclerosis is likely caused by infection with the Epstein-Barr virus (EBV).

Results of a 20-year study led by Harvard T.H. Chan School of Public Health researchers found evidence that multiple sclerosis may be caused by an infection from the Epstein-Barr virus.

Multiple sclerosis (MS) is a disease that impacts the brain and spinal cord. It can damage the central nervous system which can lead to unpredictable symptoms such as numbness, tingling, mood changes, memory problems, pain, fatigue, blindness and/or paralysis, according to the National MS Society.

Epstein-Barr virus (EBV) is a type of herpes virus, according to the U.S. Centers for Disease Control and Prevention. Most people become infected with EBV at some point in their lives, many in childhood, the CDC said. However, most of those who are infected experience no negative symptoms from the virus.

"After you get an EBV infection, the virus becomes latent (inactive) in your body. In some cases, the virus may reactivate. This does not always cause symptoms, but people with weakened immune systems are more likely to develop symptoms if EBV reactivates," according to the CDC.

The military regularly administers blood tests to its members and the researchers checked samples stored from 1993 to 2013, hunting antibodies signaling viral infection.

"Multiple sclerosis, until now, has been considered an autoimmune disease of unknown etiology, meaning we don’t know what the cause is. So we set up to do this study because we suspected that the viral infection with the Epstein-Barr virus was in fact the cause of the disease," Ascherio told FOX TV Stations.

"EBV preceded the onset of MS in virtually all cases except in one single case. I think this finding pretty much establishes that MS is a complication of infection of the Epstein-Barr virus," Ascherio added.

The connection between EBV and MS was made several years ago, according to Ascherio, due to the similarities in epidemiology. 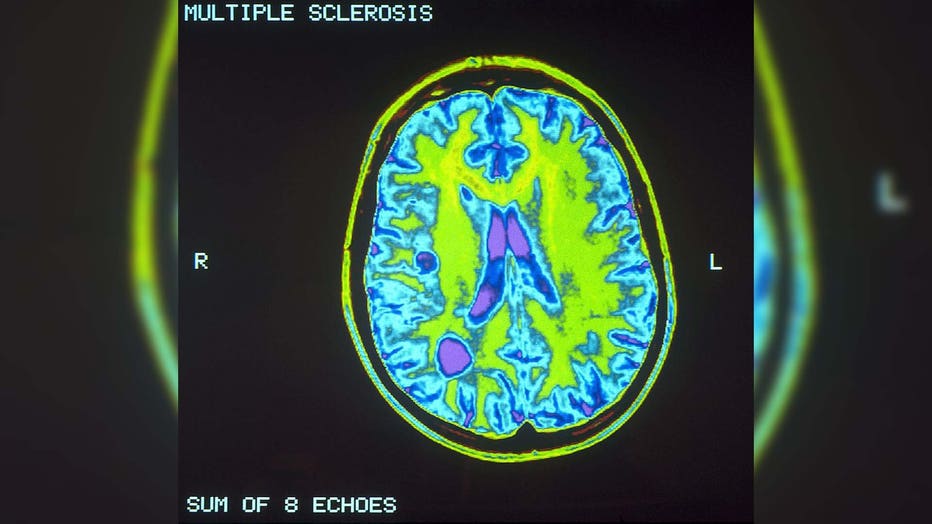 EBV infects about 95% of adults but not all of those adults will develop MS, according to the study. Of the 10 million people, 955 developed MS.

"Until now, we were talking about an association between the virus and multiple sclerosis, but because almost everyone is infected, it was difficult to demonstrate that individuals who are not infected with EBV, young adults not infected with EBV, don’t get MS until after EBV infection," Ascherio said. "So to demonstrate this temporal sequence, which is a prerequisite for causation, the cause must precede the disease, we needed to have a longitudinal follow-up of a very, very large population."

Ascherio said that the next steps to take following the study is to concentrate on prevention and treatment.

"There are two important areas to consider. One is the prevention of MS and we don’t have a vaccine today but they are in the pipeline. In fact, Moderna has a vaccine in the pipeline that just started experimenting. And so, conceivably if we have a vaccine that could prevent EBV infection, then that would prevent MS. Which is important because the incidents of MS has been increasing over the past 20 years, particularly in women, so it’s a disease that affects young people, potentially disabling with increasing incidents," Ascherio continued. "The other big area is treatment. The way we treat MS now is by basically surprising the immune system. So if we could target the virus more directly with an antiviral drug, conceivably we would get more effective and more radical treatment for MS than what we have today."

Other things to consider as far as finding treatment for MS from EBV are several factors that could increase the chances of MS. These include genetic predisposition, vitamin deficiency, smoking and childhood obesity, Ascherio explained.

While EBV infection is fairly common, Ascherio said people should not panic that they will eventually develop MS. The study is a good stepping stone to eventually create preventative measures against the disease.

"Most people will not get MS. I don’t want to scare anyone," Ascherio added. "I think the study is quite promising in that we will be able in the future to prevent MS, even in people who may be genetically predisposed or because of their family history. And that we may even be able to better treat and cure MS than we are today, so the message is entirely positive."

Ascherio acknowledged his colleagues who were part of the 20-year study, including Kassandra Munger, Dr. Kjetil Bjornevik and Marianna Cortese.