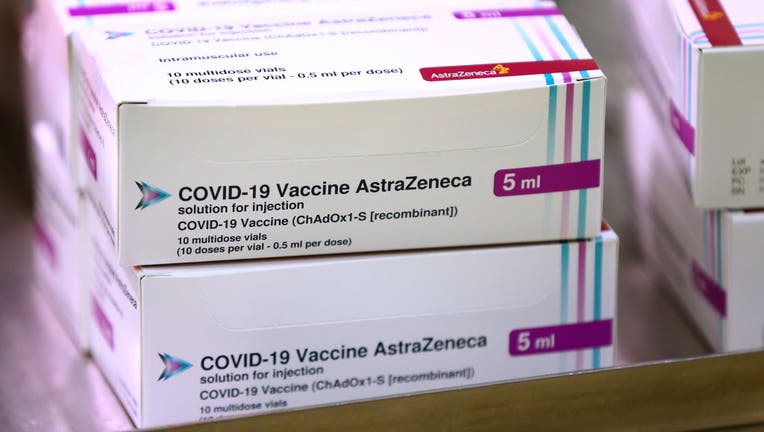 BRUSSELS (AP) - The European Union's executive branch said Monday that it has launched legal action against coronavirus vaccine-maker AstraZeneca for failing to respect the terms of its contract with the 27-nation bloc.

The AstraZeneca vaccine has been central to Europe’s immunization campaign, and a linchpin in the global strategy to get vaccines to poorer countries. But the slow pace of deliveries has frustrated the Europeans and they have held the company responsible for partly delaying their vaccine rollout.

He said the reason for the legal action was that "some terms of the contract have not been respected" and that "the company has not been in a position to come up with a reliable strategy to ensure a timely delivery of doses."

AstraZeneca’s contract with the EU, which was signed by the Commission on behalf of the member countries last August, foresaw an initial 300 million doses for distribution among member countries, with an option for a further 100 million.

The British-Swedish drugmaker had hoped to deliver 80 million doses of that in the first quarter of 2021, but only 30 million were sent. According to the Commission, the company is now set to provide 70 million doses in the second quarter, rather than the 180 million it had promised.

AstraZeneca said in a statement that it "regrets" the Commission’s decision to take legal action and that it will "strongly defend" itself in court.

"We believe any litigation is without merit and we welcome this opportunity to resolve this dispute as soon as possible," AstraZeneca said. It said deliveries are improving "following an unprecedented year of scientific discovery, very complex negotiations, and manufacturing challenges."

"We are making progress addressing the technical challenges and our output is improving, but the production cycle of a vaccine is very long which means these improvements take time to result in increased finished vaccine doses," it said.

The company said it wants to continue "working constructively with the EU Commission to vaccinate as many people as possible. Many thousands of our employees working around the clock have been driven by a passion to help the world at no profit."

The AstraZeneca vaccine is cheaper and easier to use than rival shots from Pfizer and Moderna and has been endorsed for use in over 50 countries, including by the 27-nation EU and the World Health Organization. U.S. authorities are still evaluating the vaccine.

The Commission has publicly criticized the company on several occasions, and last month it launched a dispute resolution mechanism aimed at amicably addressing their differences. Brussels said that its focus is to ensure timely deliveries of vaccines.

It since said that its option for extra AstraZeneca doses will not be taken up.

Last week, Commission President Ursula von der Leyen announced that a new vaccine contract is set to be concluded with BioNTech-Pfizer for 1.8 billion doses for the 2021-23 period. She said the deal will ensure doses for booster shots, vaccines adapted to new variants, and, potentially, vaccines for children and teenagers.

Von der Leyen said that the EU, home to around 450 million people, has "already passed 123 million vaccinations" and is on track to have vaccinated 70% of all adults by July. Previously the target had been September.