SONOMA, Calif. - It’s a question most people have likely asked themselves at one point or another: What indispensable or irreplaceable items would I take if I had to quickly pack up and leave during a fire?

The question became a reality this past week when tens of thousands of people were forced to evacuate their homes in Sonoma County and nearby cities as the wind-whipped Kincade Fire raged and continued to spread.

A Facebook group called Sonoma County Firestorm Update was created for Santa Rosa residents to get updates and share information about the North Bay firestorm in October 2017. The staff of KZST Radio Group was behind the page and recently expanded it to inform people impacted by all the Northern California wildfires.

This week, a member of the group posed a light-hearted question to fellow evacuees.

“OK, time for some comic relief. Let’s list the funniest things we grabbed this time while evacuating,” the post said.

While there is nothing funny about evacuation orders, the post drew nearly 500 comments, several pictures and a few raised eyebrows. Some evacuees took completely sensible necessities, while others grabbed items that might surprise you.

“A package of low-cal bread because in some weird, alternative universe I actually thought I was going to stay on my diet,’’ wrote one woman.

She wasn’t the only person who evacuated with food in tow.

“I was just unpacking and found a can of dolmas my husband packed with our dry food,’’ a woman confessed.

The comments continued: four packs of Jell-o and pudding, a head of broccoli, petri dishes full of gummi snakes and 50 lbs. of pulled pork bought for a party.

“My husband was laughing as he was unpacking my food bag,” she wrote.

Plenty of folks said they didn’t want to leave home without a few bottles of wine.

“My small wine stash of my favorite zinfandel from Mazzacco (Winery). Ended up sharing it every day with fellow Windsor evacuees we met here at the campground. Life is great!” wrote one man.

“You know it’s Sonoma County evacuating when everyone is talking about grabbing their wine,’’ a fellow wine lover posted.

Dozens in the group said their must-have items included underwear, makeup and toothpaste.

“We may be barefoot and covered in soot, but we will have clean teeth and fresh breath.”

“Wine, photos off the walls, underarm deodorant,’’ another evacuee wrote.

“All of my makeup, hair products, brush and hairdryer, which should have been the last thing I thought about, but I was on autopilot when packing things,’’ a woman wrote.

“My makeup. In times of crisis put on more lipstick. If someone criticizes you, put on more.”

Some evacuees said they weren’t quite sure why they grabbed what they did. A television remote, a bathroom rug and an aging houseplant were among those items.

Many pet owners chimed in, saying they quickly scooped up their cat or led their dog (or pig) out the door, but forgot the animal’s food, leash and medications. 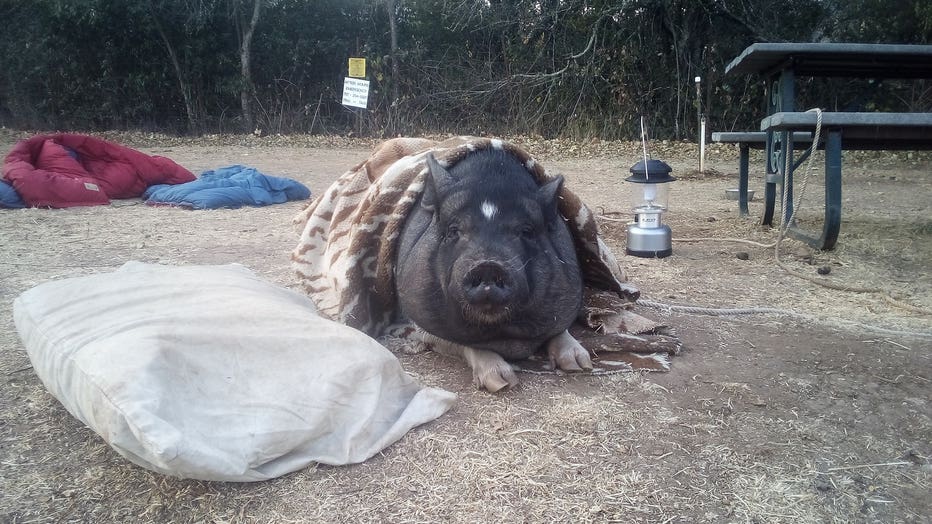 Many evacuees left quickly with their dogs and cats. One took her pig. (Facebook)

One pet owner wrote what she took: “Approximately 100 pounds of frozen raw meat for my dogs. I made my boyfriend save space in his car. “I’m not losing this rabbit meat!”

Scooping up sentimental items was the first thing on the minds of many evacuees. 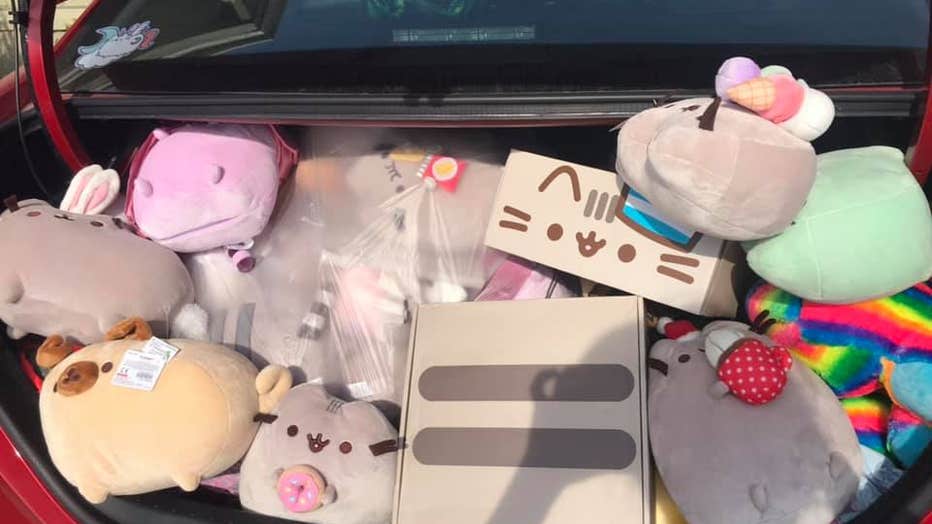 “A Ziploc (bag) with the first tooth my son lost recently,’’ wrote one mother.

When in emergency mode, people will grab things ranging from inanimate objects, food for survival and even sentimental heirlooms, but perhaps the most sentimental of all was when one bride went for a cherised item from her special day.

“My wedding cake topper and the last magnum of champagne left over from my wedding. We were gonna need that,’’ wrote one former bride.