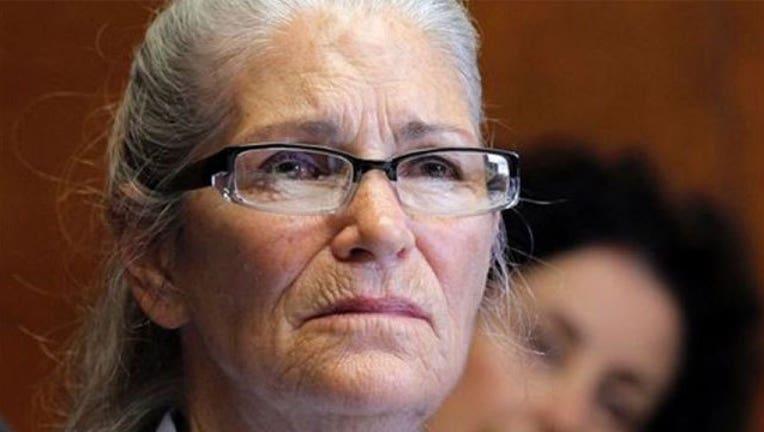 June 5, 2013: Leslie Van Houten appears during her parole hearing at the California Institution for Women in Chino, California (Associated Press)

CHINO, Calif. (AP) — Former Charles Manson follower Leslie Van Houten described in graphic detail Thursday how she helped secure a pillow over the head of murder victim Rosemary La Bianca with a lamp cord and hold her down while someone else stabbed the woman in her home in 1969.

Van Houten recounted the killing during her 21st parole hearing at the California Institution for Women, saying she had looked off into the distance until another Manson follower told her to do something and she joined in the stabbing.

"I don't let myself off the hook. I don't find parts in any of this that makes me feel the slightest bit good about myself," she told the parole board panel.

Van Houten, a one-time homecoming princess, has spent more than four decades in prison for participating in the killings of wealthy grocer Leno La Bianca and his wife Rosemary.

The La Biancas were stabbed numerous times and the word "WAR" was carved on the stomach of Leno La Bianca.

Van Houten was the youngest Manson follower to take part in one of the nation's most notorious killings after she descended into a life of drugs and joined Manson's cult in the 1960s.

The La Biancas were killed a day after other so-called "Manson family" members murdered actress Sharon Tate, pregnant wife of director Roman Polanski, and four others. The killings were the start of what Manson believed was a coming race war. He dubbed it "Helter Skelter" after a Beatles song.

Van Houten's lawyer, Rich Pfeiffer, said in an earlier interview that she presents no danger to the public and should be freed.

Sharon Tate's sister, Debra, has started an online petition opposing parole for Van Houten, saying she failed to show remorse for years after the crimes and can't be trusted.

At her last hearing in 2013, a parole commissioner told Van Houten she had failed to explain how someone as intelligent and well-bred as she could have committed such cruel and atrocious crimes.

Van Houten told the panel she had been traumatized by her parents' divorce when she was 14, her pregnancy soon after and her mother's insistence she have an abortion. During the hearing, she apologized to everyone she had harmed.

Van Houten did not participate in the Tate killings but went along the next night when the La Biancas were slain. She was 19 at the time.

Her defense lawyers portrayed her as a young woman from a good family who had been a homecoming princess and showed promise until she got involved with drugs and was recruited into Manson's cult.

During the penalty phase of her trial, she confessed to joining in stabbing Rosemary La Bianca after she was dead.

Van Houten's conviction was overturned on appeal. She was retried twice and convicted in 1978 of two counts of murder and conspiracy.

Manson, 81, and other followers involved in the killings are still jailed.

Patricia Krenwinkel and Charles "Tex" Watson have each been denied parole multiple times, while fellow defendant Susan Atkins died in prison in 2009.

Former Manson follower Bruce Davis was approved for parole but Gov. Jerry Brown blocked his release in 2014, citing the gravity of his offenses and his refusal to fully accept responsibility for his role in the murders of a stunt man and a musician.

Davis was not involved in the Tate-La Bianca murders.