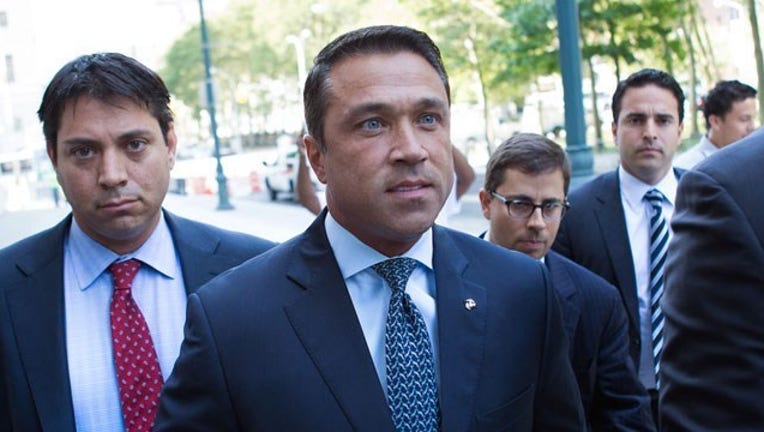 The sentencing in Brooklyn before U.S. District Judge Pamela Chen followsGrimm's guilty plea late last year to aiding in filing a false tax return — a charge that stemmed from an investigation into the Staten Island Republican's campaign financing.

The defense had asked the judge to spare him a prison term; prosecutors argued he deserved at least 2 years behind bars.

Prosecutors said the tax fraud began in 2007 after Grimm retired from the FBI and began investing in a Manhattan eatery called Healthalicious. An indictment accused him of underreporting more than $1 million in wages and receipts to evade payroll, income and sales taxes, in part by paying immigrant workers, some of them in the country illegally, in cash.

Grimm, 45, won re-election in November while fighting the charges but later resigned.

In court papers asking for a sentence of probation, defense lawyers calledGrimm's offense "an aberration in an otherwise remarkable life in selfless service of his country," including a stint in the Marine Corps. They also argued that losing his career in Congress was punishment enough.

Grimm "is tremendously remorseful over his offense," they wrote. "He understands that his tax violation is not something to be taken lightly, and he is anguished over his wrongdoing and will live with the shame of it the rest of his life."

Prosecutors countered by telling the judge that Grimm's record of "falsely minimizing his criminal conduct and impugning anyone who questions him is indicative of an individual who has not come to terms with his own crimes."

The government papers cited a news conference last year outside the courthouse where Grimm called the case "a political witch hunt." The papers also refer to an episode in which Grimm threatened to throw a local cable TV news reporter off the balcony of the capitol for asking about the campaign financing inquiry.