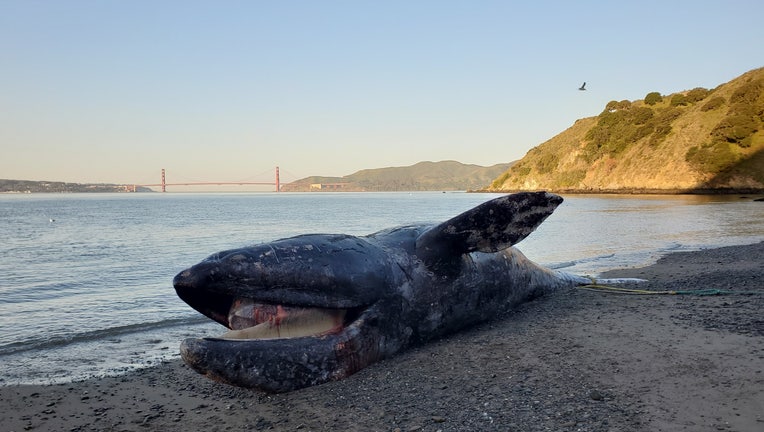 The Marine Mammal Center and its partners at California Academy of Sciences performed a necropsy, or animal autopsy, at Angel Island State Park Thursday morning, April 1, 2021, on an adult female gray whale. By investigating deaths like this, the Cen

SAN FRANCISCO - Officials with the Marine Mammal Center in Sausalito said Friday they're unable to confirm the cause of death for a gray whale that washed ashore San Francisco's Crissy Field earlier this week.

The perished whale was initially discovered on Wednesday morning by police, and after center officials were alerted, the whale's body was carefully towed to Angel Island State Park for further examination.

During the necropsy, marine mammal center experts were able to identify the whale as 41-foot adult female that was "moderately decomposed." In addition, the whale was noted to be healthy with no signs underlying illness or evidence of blunt force trauma, like bruises or fractured bones.

"We're concerned to discover this year's first gray whale death here in the San Francisco Bay Area because this species already faces many environmental challenges," Marine Mammal Center Necropsy Manager Barbie Halaska said in a statement. "While this whale's death is a sad loss for the population, the information gathered from these whales is shared directly with our partners, helping inform policy decisions that can protect habitat areas, change shipping lane speeds that intersect migration routes and better understand shifting food sources for marine mammals."

Marine mammal center experts plan to take a second look at the whale to examine skeletal remains in order be sure human interaction is not to blame for the death.

Around this time of year, gray whales undertake an annual migration north to the cool Arctic waters, and in recent years, biologists have noticed increased numbers of gray whales in the Bay. But climate change and overfishing have led to reduced prey availability for whales, according to marine mammal center officials.

"As gray whale migration season continues along the Pacific Coast, adult female gray whales and their calves are the last to migrate northward to their feeding grounds in the Arctic," Marine Mammal Center Director of Pathology Dr. Padriag Duignan said. "Following the huge increase in gray whale deaths, it was encouraging to see this particular whale in good body condition after examining so many that suffered from malnutrition."

Gray whales were once considered endangered but were removed from the list of endangered species in 1994.

In recent years, biologists have noted that most whale deaths are caused by malnutrition, entanglements, and blunt force trauma. Performing necropsies on washed up whales plays an important role in finding out ways to prevent additional whale deaths, marine mammal center officials said.

Anyone who spots a deceased whale or a whale in distress is asked to contact the Marine Mammal Center's rescue hotline at (415) 289-7325.