OAKLAND, Calif. - Sal Valencia loved his family, and he loved his Oakland A’s. He passed away on January 16, 2019, at the age of 65, but his family has been overjoyed to see his smiling face in the stands of the Oakland Coliseum once again, overlooking his beloved team. 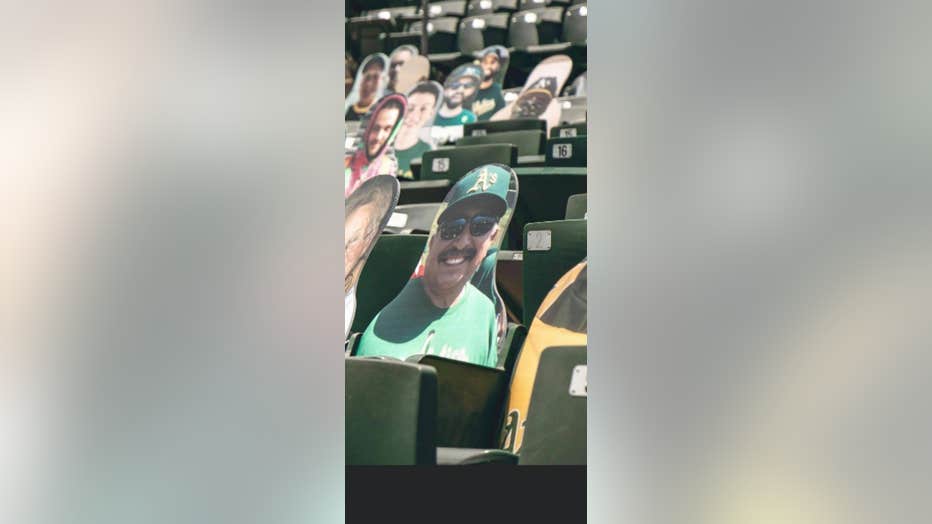 Cardboard fan cutout of the late Sal Valencia, an avid Oakland A's fan who passed away in January 2019.

The cardboard cutout of him decked out in A’s gear sat among the photos of other fans in the stands. The cutouts have filled what would have otherwise been empty seats in Major League Baseball stadiums across the country, as teams have sought innovative ways to provide the “fan experience” amid the pandemic.

"Today, he sits in the stands with the many other Oakland A’s fans root-rooting for the home team!" his daughter Alexis Sousa said.

On Friday, ahead of the A's opener, daughter Vanessa Waszczuk posted a photo of the cutout and announced that a "very special angel" would be seated in left field.

Since the passing of their dad, baseball season has been among the hardest times of the year for Valencia’s daughters.

"Last year was our first opening day without my dad,” Waszczuk told KTVU. Knowing what a difficult time it was for her, a friend reached out to Oakland A’s President Dave Kaval to tell him about the love and passion Sal Valencia had for his team and the heartbreak and void felt by this family with his passing.

The story of Sal Valencia prompted Kaval to invite Waszczuk and her family to Opening Day of the 2019 season, offering them a tour of the stadium and access to the field during batting practice. "It really made one of the hardest days to experience without him just a little bit easier," said Waszczuk. "The game of baseball and the Oakland A’s are a really big part of our family. We will never forget that special day and are truly thankful to Dave and the organization for gifting us that day.”

For Sal Valencia, the memories that made up his childhood were interwoven with the A’s. “...he used to listen to the games on his hand held radio at night as a young boy,” Sousa recalled of her dad. "He grew up with the A’s, learning the fundamentals of the game of baseball and that of life,” she added.

Valencia’s home was on the Central Coast, where as a son of fieldworkers, he too would adopt the family trade of agriculture. And it was baseball, where he would find his happy place. "Working in the fields of the central coast was a way of life, but the fields of baseball was the ultimate transportation of time into another world and one where he felt pure joy,” said Sousa.

That first time he stepped into his team’s home stadium would be a moment he carried with him always. "When he was finally able to attend a live game to see the A’s, he knew there was no greater vision to see than the Oakland Coliseum when he first saw the field,” Sousa shared.

When he got married and became a dad, that joy would be passed on and instilled in his two daughters and later his grandchildren, all of whom would attend their first-ever baseball game with the biggest Athletics fan they knew.

The cutout has been one way for Valencia's family to memorialize him, but this wasn’t the first time since his passing that they've demonstrated how much he loved his team. When they laid him to rest, they made sure the world knew Sal Valencia lived and breathed his A’s. His gravestone was adorned in green and yellow with a photo of the smiling fan and the "A" in his name Sal modeled after the team logo. Inscribed on the gravestone were the words, “May the field be joyful and all that is in it. -Psalms 96:12.” 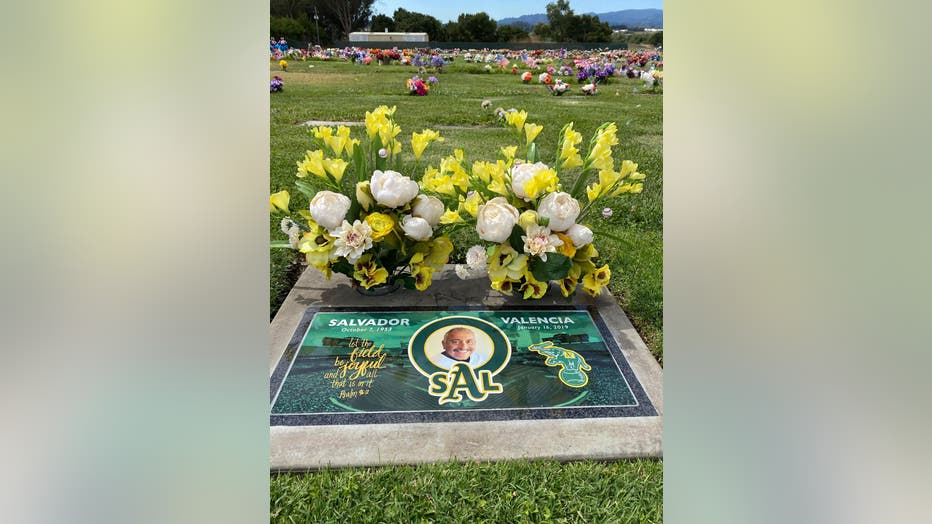 For Valencia's daughters, the vision of their dad sitting at an A’s game again has been one that's brought back the memories of the way they best remembered him, his daughters said, "Memories that have lasted forever in our hearts.”