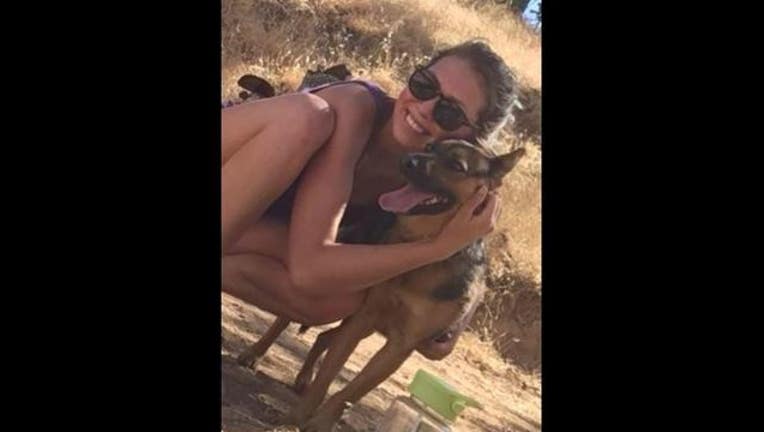 Kyra Sunshine Scarlet was hiking with a friend at Fort Funston when she was buried by a landslide. Photo provided by family.

SAN FRANCISCO (KTVU) - The woman who is presumed dead after being buried in a landslide at Fort Funston has been identified by her family as 22-year-old Kyra Sunshine Scarlet.

Scarlet grew up in Kaysville, Utah, but was most recently living in the Bay Area in Oakley.

Scarlet's family says she was walking along the beach with her dog and a friend when the landslide occurred.

Witnesses saw two women climbing up the 80-foot cliff with a dog around 2:30 p.m., according to fire officials who initially responded to the incident. The women were about halfway up when the cliff started caving in on top of them.

The landslide dumped an estimated 4 or 5 tons of dirt onto the beach. First responders and others at the scene rescued Scarlet's friend, but were unable to save her. The woman who was rescued did not have serious injuries. Scarlet's dog was not injured.

Scarlett's family released a statement that read in part, "Kyra Sunshine was a beautiful, sweet, amazing woman. She died in one of her favorite places after hiking with her sweet dog Iris and her dear friend. The family’s faith allows for them to be at peace knowing that Kyra Sunshine is in a better place and that they will be reunited in the future. The family would like to thank the many public safety agencies that have worked tirelessly to help find Kyra Sunshine, watch over the site and the kindness they have shown the family."

"From third-hand reports, this appears to be an unfortunate and isolated natural incident. Ocean waves, soft sand and soil, and recent storms events contribute to erosion of beaches and coastal bluffs," said Charlie Strickfaden, communications director for the Golden Gate National Recreation Area, in a statement.

NPS officials are reminding visitors to be aware of their surroundings and the conditions of natural coastal landscapes.