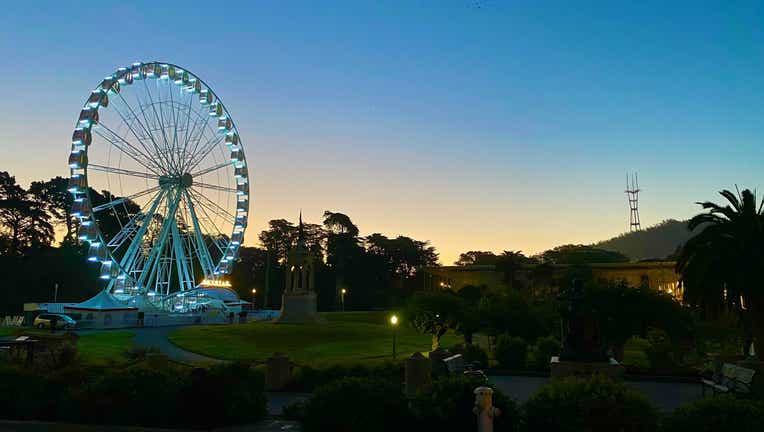 SAN FRANCISCO - San Francisco's Board of Supervisors will decide on Tuesday whether to allow a Ferris wheel at Golden Gate Park's Music Concourse to stay for another year instead of the four-year extension proposed by the city's Historic Preservation Commission.

The Board of Supervisors will consider the resolution after the supervisors' Rules Committee voted unanimously on Monday to bring it to the full board for a vote.

But supervisors Connie Chan and Aaron Peskin blocked the move, citing city law that requires the approval of supervisors for building or structure expansions at Golden Gate Park or Union Square. To that end, Chan and Peskin called for a resolution to extend the wheel's contract through February 2022.

The wheel was installed last year by the San Francisco Recreation and Parks Department as part of the park's 150th anniversary just as the COVID-19 pandemic began. Although the wheel was able to open in the fall at limited capacity, a surge in cases halted operations after just five weeks.

The discussion whether to extend the contract has resulted in a citywide debate, with the wheel's proponents citing the tourism and joy it brings to the park, while opponents allege its bright lights and electric generator harm the park's wildlife.

During Monday's Rules Committee meeting, Chan said, "Lighting the wheel for another four years really creates a question of whether this is environmentally friendly. How does it really impact our wildlife in Golden Gate Park? That was initially my thought when I expressed my concern about the wheel. Now, as I kind of dig deeper, another issue spurred up for me."

Chan and Peskin have raised concerns over the wheels contract, which allows for the Recreation and Parks Department to direct profits generated from vendors like SkyStar to go to the nonprofit San Francisco Parks Alliance.

The alliance has been named in a public corruption scandal that began in 2020 with the arrest of embattled former San Francisco Department of Public Works director Mohammed Nuru.

"It does a disservice to all my constituents if we allow a pay to play culture to fester," Chan said.