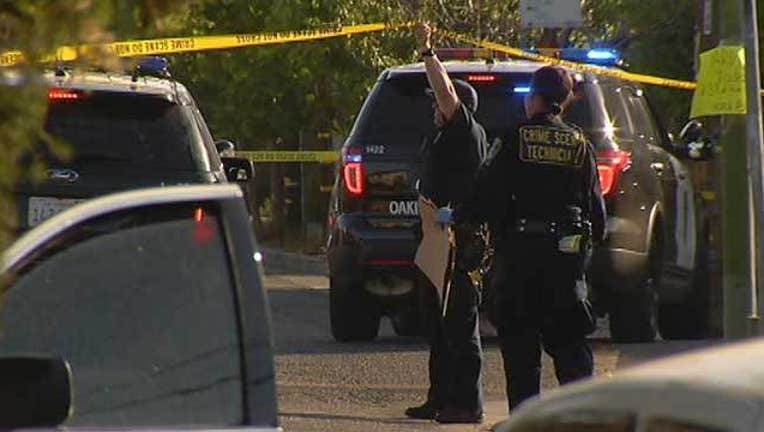 OAKLAND, Calif. (KTVU and wires) -- Investigators are looking into whether the father of a 4-year-old girl who was shot in East Oakland on Tuesday afternoon provoked the shooting suspects by firing on them with a paintball gun, a police officer said Thursday.

The father and another man were arrested after arriving at the hospital to check on the girl, Oakland police Officer Frank Bonifacio said. They were booked into jail on suspicion of child endangerment.

Bonifacio did not release the names of the two men, but according to jail records, they are Marcel Powell, 21, and Julius Miller, 22.

Miller and Powell were fired upon while driving through the intersection of 81st Avenue and Rudsdale Street at about 4 p.m., according to police.

The 4-year-old girl was in the back seat of the car and was struck by gunfire. They crashed into a tree just up 81st Avenue and called for help to get the girl to a hospital.

An Alameda County sheriff's deputy responded and helped transport the girl from 77th Avenue and Macarthur Boulevard to the hospital in his patrol car, according to police. The girl is expected to survive her injuries.

Officers found a paintball gun next to the crashed car, and according to witness accounts, the two men had been driving around on International Boulevard shooting at people and cars throughout the afternoon, Bonifacio said.

Police are looking into the possibility that their actions provoked the shooting. Whoever shot and injured the 4-year-old girl remains at large, Bonifacio said.

Police are asking anyone with information about the shooting to contact Oakland police at (510) 238-3326.